Software giant Microsoft (NASDAQ:MSFT) issued a press release on July 8 announcing that the company would be "restructuring" its phone business. This restructuring will include a slashing of up to 7,800 positions, a $7.6 billion impairment charge related to its acquisition of the Nokia (NYSE:NOK) Devices and Services group, and an additional restructuring charge of between $750 million to $850 million.

The large impairment charge comes as the company believes that the "future prospects" for its phone business are "below original expectations." Microsoft expects that this restructuring will be "substantially complete" by the end of calendar 2015 and "fully completed" by the end of Microsoft's fiscal year (which ends in June 2016).

This announcement seems to be a clear admission on Microsoft's part that its foray into the smartphone market has been a disaster.

Very few vendors are profitable, yet Microsoft thought it could make bank

When Microsoft announced that it planned to acquire the Nokia device business, the company hosted a presentation outlining the "strategic rationale" behind the deal. You can view the full presentation here, but the following slide shows Microsoft's financial expectations with respect to the deal: 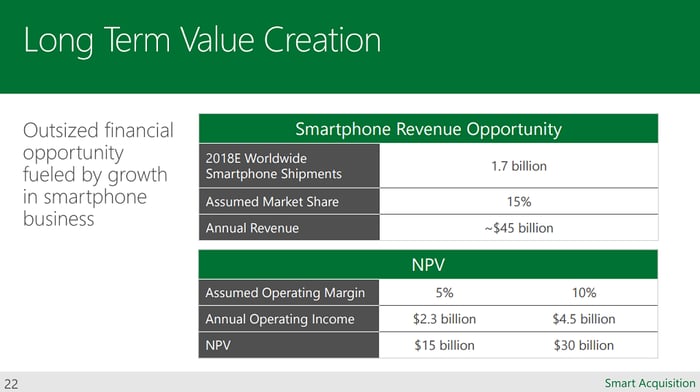 Microsoft expected that it would be able to grab a whole 15% of the smartphone market (up from the 3.3% that Windows Phone had in 2013 and 2.7% in 2014 according to IDC) by 2018. Additionally, Microsoft showed that if it could bring in between 5% and 10% operating margins, then it could deliver between $2.3 billion and $4.5 billion operating income, leading to a net present value for the business of between $15 billion and $30 billion.

The problem here is that the assumption of 15% market segment share was almost certainly way too aggressive. And, given that established smartphone vendors such as LG and HTC routinely struggle to turn a profit in this business by selling handsets with the popular Android operating system (LG's mobile business saw a whopping 2% operating margin last quarter while HTC's preliminary earnings results show red ink), Microsoft's expectations may, frankly, have been completely out of touch with reality.

What now for Microsoft's mobile ambitions?
In an email that Microsoft CEO Satya Nadella sent out to employees (which Microsoft made public), Nadella said that he is "committed to [Microsoft's] first party devices including phones."

Interestingly enough, he said that Microsoft will be moving away from a strategy of trying to build a stand-alone phone business to trying to "grow and create a vibrant Windows ecosystem that includes [Microsoft's] first-party device family."

If I had to guess, I'd say that Microsoft will stop trying to offer a wide range of smartphones and will instead focus on building one or two "halo" phones each year, in the same vein as Surface.

As far as the financial impact from these restructuring actions go, Microsoft said in the press release that the "impairment of assets and goodwill in its Phone Hardware segment" will have "no impact on cash flow from operations."

Microsoft Corp. Admits That Its Smartphone Foray Has Been a Disaster @themotleyfool #stocks $MSFT $NOK Next Article
Current