Please ensure Javascript is enabled for purposes of website accessibility
Free Article Join Over 1 Million Premium Members And Get More In-Depth Stock Guidance and Research
By Evan Niu, CFA - Jul 11, 2015 at 9:02AM

This Fool has been a Tesla shareholder for over four years, and there are plenty of risks in the years ahead. This will be quite a ride.

It was early 2011 when my wife first suggested that we invest in Tesla Motors ( TSLA 1.64% ). A passionate environmentalist, she was familiar with what the company was pioneering with electric cars. As the financially inclined one, it was up to me to vet the upstart automaker. But frankly, given where Tesla's financial results were at the time relative to its longer-term story, it was something of a futile exercise.

The company had started delivering the Roadster a couple of years earlier and had already announced the Model S, but it wouldn't ship until the following year. Fiscal 2010 revenue was just $29.2 million, and red ink was everywhere. Tesla was just beginning in earnest its manufacturing efforts, having closed the purchase of its Fremont factory the previous October. It purchased $17 million of manufacturing equipment and spare parts from NUMMI and Toyota at significant discounts, all of which would contribute to the Model S platform.

We ended up purchasing shares in May 2011 at $30 and change. As luck would have it, Fool co-founder David Gardner would officially recommend Tesla just months later. It's done quite well since then. Over the years, we've opportunistically added to the position a couple of times, most recently in December 2013 at $135. At this point, thanks in large part to its recent performance, Tesla is our largest holding (yes, even larger than Apple), coming in at 27% of our family portfolio as of this writing.

What's a Fool to do?
Anytime you have a stock that skyrockets in the way that Tesla has, it's always wise to evaluate the company's prospects and valuation to determine if some rebalancing is in order. If a company's business begins to deteriorate, maybe exiting the position makes sense. Maybe the business is just fine, but diversification for its own sake is never a bad thing, since it reduces overall portfolio risk.

With all of that in mind, what do I do about Tesla? On one hand, the company continues to execute extremely well, and Model S deliveries continue to march steadily higher. After several delays, the Model X launch is just around the corner. 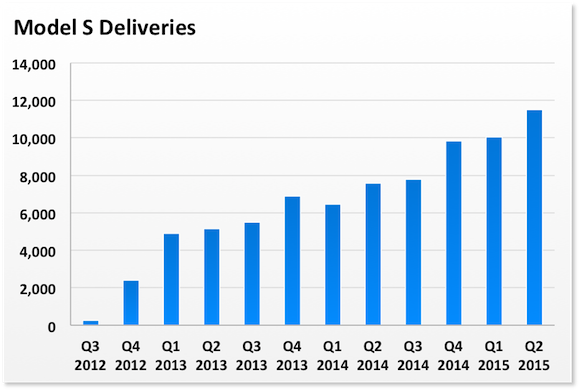 But just because the company is doing well fundamentally and trading at all-time highs doesn't mean I'm not worried. Quite the contrary: I'm more than a little bit worried.

The valuation is insane
It's effectively common sense at this point that Tesla is priced for perfection. Comparing the company to any other traditional automaker using any traditional metric will show you that shares are trading at a massive premium.

It looks downright ridiculous, but at the same time this comparison of traditional valuation metrics is largely misplaced and potentially irrelevant. Truly disruptive companies can't be valued by traditional metrics. Making matters worse, I don't follow the auto industry closely (I'm a tech guy). This just magnifies my concerns, considering the risks Tesla will face in the years to come, and there will be plenty of them.

Where do we start with the risks?
Tesla's cash position is under severe strain right now. The company had only $1.5 billion at the end of last quarter after burning through nearly $400 million during the quarter. Ideally, a successful Model X launch will help replenish the coffers, but what if the rollout doesn't go as well as hoped?

The company could be forced to raise external capital (again). But it already has quite a hefty debt burden -- $2.6 billion at last count. Interest expense was $26.5 million last quarter, or about 10% of gross profit. Normally, I'd look at interest expense as a percentage of operating income, but Tesla has long operated in the red.

Much of this accumulated debt comes in the form of convertible notes. Technically, the conversion prices are $124.52 (for the 2013 offering) and $359.87 (for the 2014 offering), but Tesla entered hedge transactions that effectively increase those conversion prices to $184.48 and $512.66, respectively. The 2013 batch (which is due 2018) is clearly well in the money and can be converted at any time, while the 2014 batch (which is due 2019) has a long way to go. Any conversions would save the company money in terms of interest and principal, but they would also be dilutive.

Just last month, Tesla negotiated a credit facility that gives it access of up to $750 million, but Tesla hopes it won't come to that. Let's just hope the Model X launch goes swimmingly.

Looking longer-term, there are naturally even more risks to consider. What if the Model 3 fails? What if the Gigafactory fails to bring down battery costs? What if Elon Musk steps down after the Model 3 (which he has implied is a possibility)? What if traditional competitors have finally wised up and start to successfully eat into the EV market? What if Powerwall flops, and by extension Tesla's energy-storage ambitions fail?

There is no shortage of risks that Tesla faces. The list will only get longer as EV competition intensifies, since Tesla has demonstrated that the demand is there. But what keeps me up at night is that the current valuation leaves very little room for any execution errors. That's not to say Tesla couldn't recover from any fumbles, but said fumbles would be rather punishing indeed, considering the current state of investor expectations.

Yet I've also decided not to sell any shares.

I want to be like my dad when I grow up
As always, there is a psychological aspect to consider. A young gambler at heart, I also want to let it ride. In some ways, I think Tesla could end up being my Microsoft.

Let me explain. My dad is a good old-fashioned long-term investor. He first purchased Microsoft in 1987 (200 shares at around $70 per share). He still owns it. In fact, I've tried many times over the years to persuade him into diversifying, since it has become a disproportionately large holding. He always resists, fearing capital gains taxes and seeing no compelling or practical reason to. Plus, he loves the dividends.

He's also fallen victim to the "house money effect." His gains over the decades are so large that he wants to let it ride, much like how gamblers at a casino are willing to take greater risks when they're up, figuring that they're playing with house money at that point anyway. Over the years, dividends have already more than paid for his original cost basis. It's a psychological pitfall, since that money is no longer the house's, but he is human.

At the foundation of that story lies the belief that superior returns can be had by recognizing incredible businesses with the long-term potential to affect industries and the world, such as Microsoft in 1987, when the PC was young and before Windows took over the world. It's conceivable that Tesla is at a similar inflection point in the auto industry, and that the seemingly inevitable transition to mainstream electric cars has now begun, even if it will take decades to unfold, given the slow product and upgrade cycles in the auto market.

The people who are crazy enough to think they can change the world are the ones who do
Tesla has a clear vision for changing the world. I believe in what Tesla stands for, and that it truly has the potential to disrupt an industry ripe for disruption (on the distribution side, aren't you tired of haggling with car salesmen?). The real question is whether Tesla can pull it off in the long run, which only time will tell. Of course, investing is a dynamic process, so I would absolutely consider selling if Tesla's ambitions turn into nothing more than pipe dreams.

But for now, Tesla has an inspiring path in place, even if this year will require a "staggering" amount of capital expenditures. I'm not focusing on this year -- I'm focusing on the year after that, and the year after that, and so on. Just like back in 2011, it's not so much about what Tesla is now, but more about what it can become if it realizes its full potential in the years to come. This is why I'm not selling. Besides, my wife won't let me.