A CD can be a great way to put your cash to work, but it shouldn't be looked at as an investment.

A certificate of deposit, or CD, is a time-deposit offered by banks. While these accounts can be a part of a sound financial planning strategy, they aren't the best choice for long-term investments. Here's what you should know about CDs, and how they could fit into your investment portfolio.

What is a CD?
When you put money into a CD, you're agreeing to leave your money on deposit at the bank for a set period of time, typically from three months to five years. In exchange for giving up access to the money, banks offer better rates on CD accounts than on standard deposit products such as savings accounts and interest-bearing checking accounts. 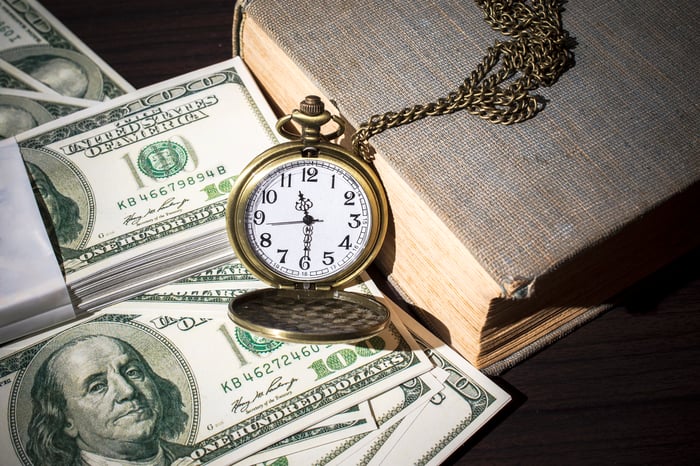 The end of the agreed-upon time frame is known as the CD's maturity date, and after this time the money in the CD can be either withdrawn or rolled over into a new CD. Account holders can choose to withdraw their money early, but it will be subject to a penalty that depends on the particular bank's policy. For example, a common penalty for withdrawing from a five-year CD early could be an amount equal to six months' worth of interest.

The FDIC and NCUA insure money deposited into CDs for up to $250,000 per account holder, and supplemental insurance may cover larger accounts (check with your bank). For this reason, a CD is considered one of the safest investments available.

Just to illustrate this point, the average interest rate you could expect from a branch-based (i.e., not online) savings account is about 0.13%. The national average CD interest rates range from 0.15% for a three-month account to 1.28% for a five-year CD.

CD interest rates vary by some other factors as well. For example, credit unions and smaller institutions tend to pay higher interest rates than larger and national banks. CDs with higher minimum deposit requirements tend to pay more as well, with the best rates typically given to "jumbo" CDs -- accounts with $100,000 or more.

One smart way to use a CD in an investment plan
There are few safer places to keep your money than in an FDIC-insured CD. However, to get the highest rates, you need to keep your money tied up for five years. For many investors, this defeats the purpose of keeping some of their portfolio in cash.

One solution is to create a CD ladder, which basically involves splitting your money into equal amounts and then investing it in CDs of periodic maturities.

For example, let's say you have $10,000 in cash. You could split that into five $2,000 CDs, with maturities of one, two, three, four, and five years. After a year passes, the first CD will mature, you'll reinvest the proceeds in a new five-year CD, and you'll repeat this process every year as another $2,000 matures.

Eventually, you'll have an entire portfolio of CDs earning five-year interest rates, and some of your portfolio will mature every year. This can be a particularly good strategy when interest rates are low (as they are now), as it lets you earn a decent return on your money now but still allows you to take advantage when rates rise.

One thing to keep in mind
Inflation can be a major problem when investing in CDs. The interest rates you get with a CD are generally no higher than the expected inflation rate going forward and can erode your purchasing power over time.

For example, the Federal Reserve has made it clear that its long-term target for inflation is 2% per year, a number that's quite close to the actual current inflation rate. Well, the highest-paying (five-year) CDs pay 1.28%, on average. In other words, by putting money into a five-year CD, you're actually losing 0.72% in purchasing power each year. Over the long term, this can really add up.

The takeaway
CD accounts can be an excellent way to put the cash in your portfolio to work and are a better choice than a savings account for money you won't need to spend anytime soon. However, they aren't a great investment choice, and you'd be better off with the vast majority of your portfolio in other assets.