Last quarter, NVIDIA (NASDAQ:NVDA) issued forward revenue guidance that came in about $100 million lower than the Street consensus.  This weakness has been largely attributed to weaker-than-expected PC industry performance. Indeed, NVIDIA CFO Collette Kress said on the company's last earnings call that the company's "OEM and IP" business unit was down 38% year over year, partially because of a challenging PC environment.

Fellow Fool Timothy Green recently argued that investors shouldn't sell NVIDIA based on overall PC weakness as the market for gaming-oriented graphics processors is still quite robust and can more than pick up the slack. Is Green correct? Let's take a closer look.

During the company's 2015 Financial Analyst Day held earlier this year, Kress showed the following slide illustrating the dramatic change in the company's business mix from fiscal 2013 to the fourth quarter of the company's fiscal 2015: 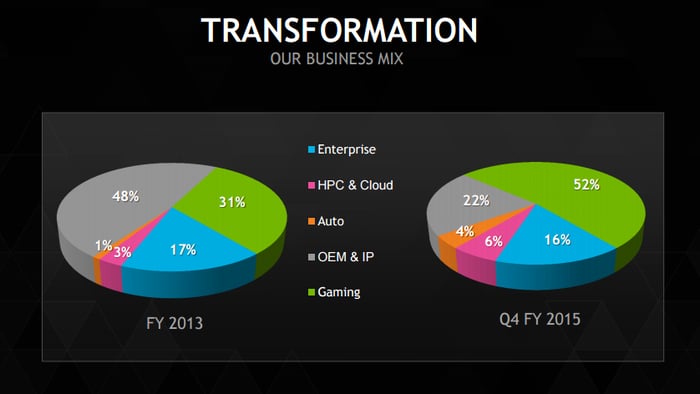 Note that in NVIDIA's fiscal 2013, nearly half of the company's revenue came from "OEM and IP," which includes stand-alone graphics processors that go into non-gaming PCs, and just 31% came from gaming. In the final quarter of NVIDIA's fiscal 2015, although OEM and IP still comprised 22% of sales.

Now, as far as I understand, the vast majority of NVIDIA's IP revenue comes from its patent licensing agreement with Intel (NASDAQ:INTC), which is good for $66 million per quarter.  Stripping the Intel royalty payment out of NVIDIA's OEM revenue for the fourth quarter of fiscal 2015 leaves us with OEM-related revenue of roughly $209 million, or just under 17% of the company's revenue in the quarter.

If we assume most of that OEM revenue is from stand-alone graphics processors (rather than Tegra mobile chips), it's clear that NVIDIA has non-trivial exposure to the "traditional" PC market, but it certainly doesn't dominate the company's revenue mix.

The PC OEM business is also "lower quality" business
In addition to being a relatively small portion of NVIDIA's overall revenue mix, the PC OEM business is also far lower margin revenue. According to the following slide shown at NVIDIA's Financial Analyst Day, gross profit margins on OEM revenue is significantly lower than that of its other graphics processor businesses: 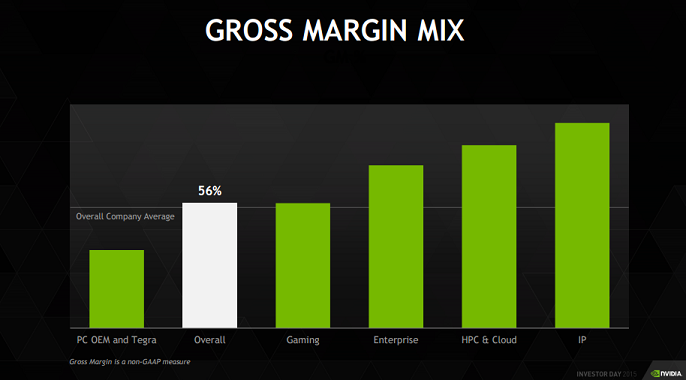 This means that every dollar of OEM-related revenue translates into far less in terms of gross profit, and ultimately net profit, than gaming-related revenue.

Further, for non-gaming laptops, integrated graphics solutions from Intel and to the extent that it can actually gain PC share, Advanced Micro Devices (NASDAQ:AMD), are probably going to win out over discrete graphics solutions as they are cheaper and are "good enough."

Although it would be nice for NVIDIA to capture as much revenue as it can within the PC OEM business, the reality is that the gaming-oriented graphics processor market is far more attractive from both a revenue, margin, and growth perspective to NVIDIA than the OEM business is.

It's hard to disagree with Timothy Green
I agree with my fellow Foolish colleague in that a weak overall PC industry isn't necessarily a reason to sell NVIDIA at this point. NVIDIA is not immune to overall PC market demand, but I also believe that the apparent strength in the market for gaming-oriented graphics processors, as well as NVIDIA's strong competitive positioning within this business, allows the company to stand apart from vendors that are more broadly exposed to the traditional PC market.