These companies may not exhibit market-beating growth within the next 6 months to a year. But their long-term growth prospects -- over the next 5 to 10 years -- look sound.

Crude oil refining and marketing companies will continue to thrive. As long as the United States continues to produce record amounts of crude oil with a ban in place against exporting the black gold, downstream companies will remain attractive targets for value investors. Keeping this in mind, there are three downstream stocks that investors must watch closely: Marathon Petroleum ( MPC 0.10% ), Delek U.S. Holdings, ( DK 1.15% ) and Tesoro ( ANDV ).

The spread that's crucial to driving gross margins
Thanks to the export ban -- in effect since the Arab oil embargo in 1973 -- the growing volumes of crude oil produced in the United States do not have any place to flow except to domestic refineries. This has caused domestic crude-price benchmarks to lag behind their international counterparts, well-documented by the Brent-WTI spread. This spread is nothing more than the price difference per barrel between the internationally traded Brent crude oil and the domestic benchmark, the West Texas Intermediate. 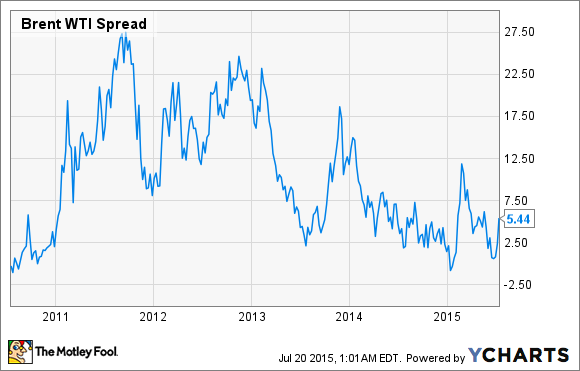 Refineries having access to WTI or any of its variants will have to pay much lower for feedstock when compared to refineries buying Brent crude or similarly priced variants. In other words, the greater the spread, the more cost effective it is for U.S. refineries, driving gross margins.

Better connectivity with producing regions
Second, the Gulf Coast -- where the majority of the United States' refining capacity is located -- is now awash with various grades of crude oil. New oil pipelines and crude by rail make the Bakken and Permian shale oil accessible to Gulf Coast refineries. Consequently, imports have dropped and so have their prices. That makes U.S. refiners all the more attractive as their cost savings are now two-pronged.

Upgraded equipment and higher crack spreads round up the advantages
Third, over the past couple of years, refining companies have been upgrading their equipment in order to process heavier variants of crude oil, especially the ridiculously cheap bituminous crude from Canada. An excellent example of that is Marathon Petroleum, which upgraded and expanded its Detroit refinery in 2012 to enable it to process an additional 80,000 barrels per day (bpd) of heavy sour crude oil, including Canadian crudes. Past investments are slowly turning fruitful and these advantages should remain in place for decades to come.

Fourth, prices for refined products such as gasoline and diesel still track international market prices. Marathon and Tesoro have been gradually expanding their export capacity of refined products, which obviously increases the revenue-growth potential for these refiners.

While these refiners don't necessarily share the same set of advantages, their individual strategies make them attractive investment targets.

Marathon Petroleum: Marathon's primary advantage is its fully integrated downstream system (see the following chart). In addition to its 1.7 million bpd refining capacity, the Ohio-based refiner has interests (including ownership and leasing rights) in about 8,300 miles of pipelines. With four of its refineries, or 39% of its refining capacity, located in the Midwest, Marathon has easy access to advantaged crude. The well-connected pipeline network further enhances access to cheaper feedstock. . Last week, Marathon announced the acquisition of natural gas processing company MarkWest Energy Partners (NYSE: MWE) through its master limited partnership MPLX LP ( MPLX -1.95% ) for $15.6 billion. The refiner has serious plans to get into natural gas processing which would further integrate its already solid downstream business. The diversified MLP would become a stable source of cash flow whose value should reflect solidly on the parent company in the long run.

In addition, Marathon's wholesale and its Speedway and Hess-branded retail outlets nicely complement its refining and logistics businesses. Being involved in the consumer (or end) market gives the company more control over its business model, not to mention the additional flexibility to tweak its business model when required.

Delek U.S. Holdings: For Delek, approximately 75% of its crude slate consists of cost-advantaged Midland and local crude supply. The Brentwood, Tennessee-based refiner has been steadily improving its access to cost-advantaged crude oil supply. The refiner has also expanded its Tyler refinery capacity by 15,000 bpd. Additionally, Delek increased its light crude processing capability given that most of U.S. crude oil production is light sweet in nature. Like Marathon, Delek is gradually building its own integrated downstream system, which will likely increase efficiencies and cut down overall costs. Central to its ambitions is its acquisition of a 48% stake in competitor Alon USA Energy. The acquisition gives Delek access to another 217,000 bpd refining capacity and 295 7-Eleven convenience stores.

Tesoro: The San Antonio, Texas-based refiner already has the infrastructure in place: 850,000 bpd refining capacity and 2,300 retail stations, which have sales of 275,000 bpd and 90% market integration. All the refiner needs to do is optimize its value chain through improving margins and a stronger retail presence. And how does it plan to do that? With a significant refining capacity located on the West Coast, Tesoro is eyeing delivery of advantaged Canadian heavy crudes through a rail-to-marine terminal capable of delivering up to 360,000 bpd to its West Coast refineries.

Another value enhancement strategy Tesoro is pursuing is through logistics growth. Western United States doesn't yet have a fully developed midstream network. With Tesoro already being one of the leading "full-service" providers of upstream and downstream logistics in this region, it has an immense competitive advantage to exploit. Through its master limited partnership, Tesoro Logistics LP ( ANDX ), management sees a huge value driving investment opportunity. By 2017, management expects "logistics" to contribute 30% to total EBITDA, a significant jump from the 15% in 2014. 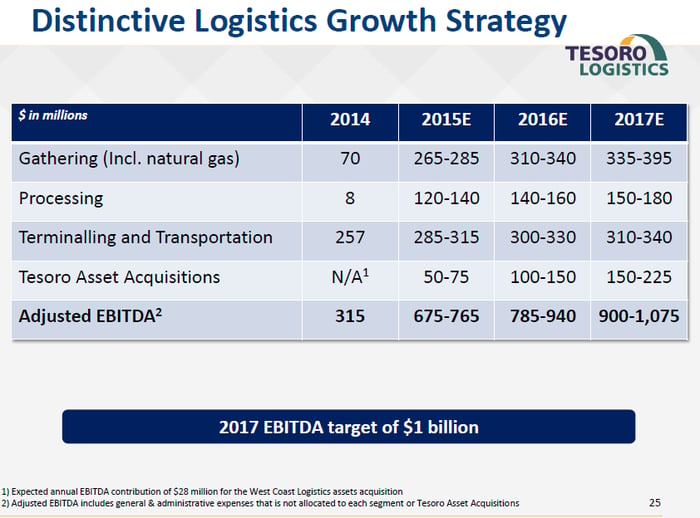 Foolish bottom line
Thanks to record volumes of crude oil production in the United States and growing production in Canada, the market has changed structurally into one that explicitly hands solid growth prospects to refiners. These companies may not exhibit market-beating growth within the next six months to a year, but their long-term growth prospects -- over the next five to 10 years -- look sound. These advantages look highly unlikely to disappear anytime soon.