The biotech finally gets a positive clinical trial result in a decently sized market.

Score one for tenacity. Exelixis (EXEL -2.23%) is up almost 50% today after releasing positive results from its phase 3 trial, dubbed Meteor, testing its drug Cometriq in patients with kidney cancer.

It's been a long road to get here.

Like many biotechs, Exelixis started off going for the easier win, getting Cometriq approved in patients where there weren't any other treatment options: medullary thyroid cancer. This rare type of thyroid cancer hasn't produced much in the way of revenue, though. In the first quarter, Exelixis booked just $9.4 million in Cometriq sales.

Next Exelixis went after a larger market -- prostate cancer -- but its drug failed to improve overall survival compared to prednisone in a phase 3 trial. There was a trend in the right direction, but the difference between the two treatment arms wasn't statistically significant.

And the wait began
After the failure in prostate cancer, investors had to wait almost a year for the results in kidney cancer. Results were due last quarter, but in May, Exelixis pushed back expectations, saying patients were taking longer to progress than expected. While certainly good news for patients, it's never clear until the data is unblinded whether the longer-than-expected delay in progression is coming from patients getting the experimental treatment or the control treatment.

Investors who held out after the drop following the prostate cancer data was reveled have been handsomely rewarded. 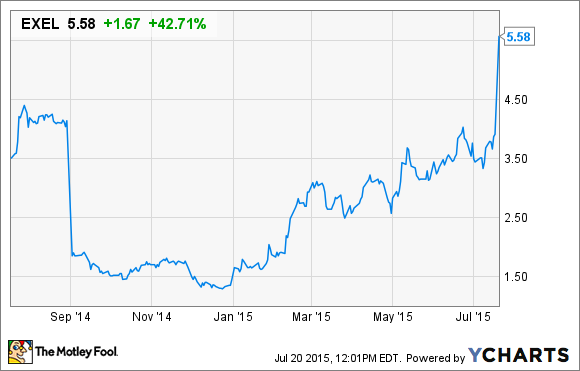 Solid data
We still don't know whether one or both of the treatment arms took longer to progress than expected because Exelixis only released the comparison of the two treatment arms, but it's pretty clear Cometriq is substantially better than Novartis' Afinitor at delaying progression of the disease while keeping patients alive, referred to as progression-free survival. An analysis of the first 375 patients in the Meteor clinical trial revealed that Cometriq improved progression-free survival by 42% compared to Afinitor.

The trial also tracked overall survival -- arguably a more important metric to patients and doctors than time to progression -- which showed a strong trend in the right direction, with Cometriq reducing the risk of death by 33% compared to Afinitor. The p-vale for the comparison was 0.005, which would normally be statistically significant -- 0.05 or less is typically required -- but because this was an interim look, the comparison needed to reach a p-value of 0.0019 to achieve statistical significance.

The trial will continue and have another chance to reach statistical significance on overall survival next year. With more data and a higher p-value threshold, it seems likely Cometriq will be able to beat Afinitor on overall survival at the completion of the trial.

Afinitor is the most common -- although certainly not the only -- drug used in kidney cancer patients who have progressed after being treated with a VEGF-targeted drug, such as Pfizer's Sutent or Amgen's Nexavar. Exelixis estimates that Afinitor produced sales around $400 million in kidney cancer, which now appear up for the taking given today's data. Afinitor is approved to treat four other types of cancer, so don't feel too sorry for Novartis.

A wrinkle in the Cinderella story
The Meteor data is wonderful for Exelixis and its shareholders, but it wasn't the only kidney cancer news today. Bristol-Myers Squibb announced that its immuno-oncology drug Opdivo demonstrated "superior overall survival" compared to Afinitor.

"Superior overall survival" is in quotes because that's all the information Bristol-Myers Squibb released. We don't know how many patients were evaluated, how long Opdivo extended survival compared to Afinitor, or by how much Opdivo reduced the risk of death.

Bristol-Myers Squibb's trial, dubbed Checkmate-025, started in September 2012 and enrolled 821 patients; this was an interim look at the data since the trial wasn't scheduled to finish until next year.

By comparison, Exelixis' Meteor trial started in June 2013 and enrolled 650 patients. We know the aforementioned 33% risk of death was from the first 375 patients.

Reading between the lines, it seems likely Bristol-Myers Squibb's data is from more patients since the trial started earlier and enrolled more patients, so it shouldn't be too worrisome that it reached statistical significance while the Exelixis trial hasn't yet.

At some point when both trials are complete, we'll get to compare the actual increases in overall survival and corresponding reductions in risk of death -- but even then, we'll have to continue reading between the lines, because the trials have different designs. Exelixis' Meteor trial doesn't allow crossover -- once a patient progresses on one drug, they can't switch to the other -- while patients in Bristol-Myers Squibb's Checkmate-025 who received Afinitor will be allowed to get Opdivo now that it's demonstrated superior overall survival.

This may not be a winner-take-all situation. Cometriq and Opdivo work in entirely different ways, and could be combined to help kidney cancer patients. In fact, last month Exelixis and Bristol-Myers Squibb, in combination with the U.S. National Cancer Institute, started a phase 1 trial testing the combination of the two drugs in patients with bladder and other genitourinary tumors.

Brian Orelli has no position in any stocks mentioned. The Motley Fool recommends Exelixis. Try any of our Foolish newsletter services free for 30 days. We Fools may not all hold the same opinions, but we all believe that considering a diverse range of insights makes us better investors. The Motley Fool has a disclosure policy.