Our three lifters this week include a top cruise ship operator, an engine maker, and an energy giant.

Naturally, out of these pronouncements, a few represent increases over their predecessors. As with the previous week, we have a lot of raisers to choose from for this installment of our series. Based on the general investor interest level and variety, our current trio are as follows.

1. Carnival (CCL 4.48%) (CUK 4.10%)
The well-known cruise ship operator isn't an active dividend raiser, increasing its payout only once between 2010 and this year. Last week was an exception, though, and a memorable one -- the company lifted its quarterly distribution by 20% to $0.30 per share.

Given Carnival's most recently reported quarter, the company probably had little choice. Q2 saw it more than double its net income on a year-over-year basis to $193 million ($0.25 per share) from Q2 2014's $73 million ($0.09), thanks mostly to higher bookings and lower expenses.

Meanwhile, its free cash flow has been relatively high of late, giving it the financial scope to raise the dividend. 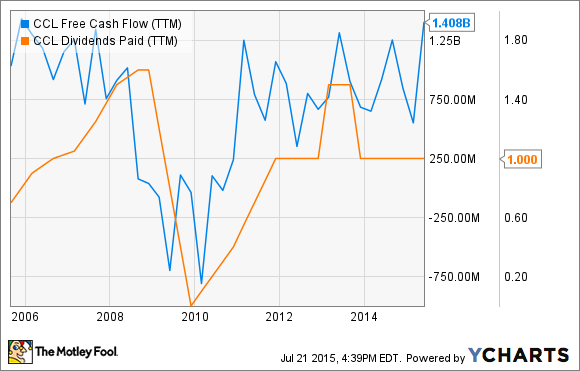 Travel can be a fickle business, but Carnival has been steady with its payout through the often choppy seas of the industry. I think this new level will stick for a while.

Carnival's new dividend is to be paid on September 11 to holders of record as of August 21.

2. Cummins (CMI 0.72%)
In contrast to the Carnivals of the world, this storied truck engine maker has habitually raised its quarterly dividend every year since the dawn of this decade. 2015's edition of the Cummins yearly hike is a 25% lift to almost $0.98 per share. 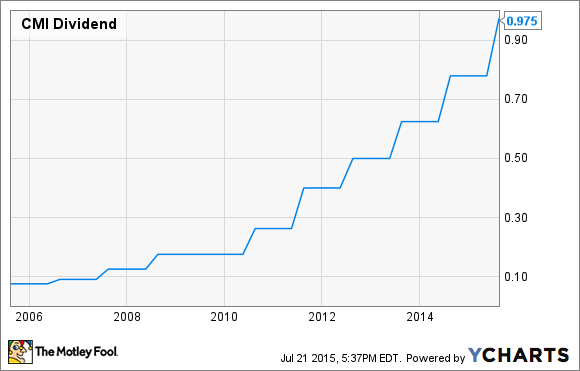 That big bump probably reflects confidence in the company's cash flow rather than any big expected rise in key financials. Despite a generally encouraging Q1, Cummins has stuck to its forecast of 2% to 4% year-over-year revenue growth for fiscal 2015.

That's not a high amount, but it should keep the cash flowing in, and continue to provide plenty of dosh for dividends. The company's free cash flow in 2014 was the highest it had been in years, at over $1.5 billion. It was also nearly three times as much as it handed out in dividends.

This is a company that runs its business conservatively, so you can bet if it raises its distribution, it anticipates having more than enough greenbacks on hand to cover it. So in my opinion, said distribution is safe for now.

Cummins' upcoming payout will be dispensed on September 1 to stockholders of record as of August 21.

3. Kinder Morgan (KMI 0.43%)
A favorite of dividend investors, this giant energy conglomerate continues to deliver the goods. A habitual raiser of its quarterly dividend, it's staying true to form by upping it by 2% to $0.49 per share.

Change is afoot at Kinder Morgan, with co-founder and CEO Richard Kinder recently stepping down as CEO. This occurred not long after the company folded its big brood of master limited partnerships into the parent entity.

Meanwhile, although Q2 results were mildly disappointing -- not unexpected, given the trajectory of oil prices -- the company has many factors going for it. To name but a few, there's a growing backlog, and it has numerous investments in solid projects and a strong position in natural gas transportation.

Kinder Morgan likes to pay out as much as it can possibly manage in dividends. This has led to concerns that the habit of constantly raising its payout is unsustainable. But the company has proven that it can add to its payout even during relatively weak quarters and continue to thrive. 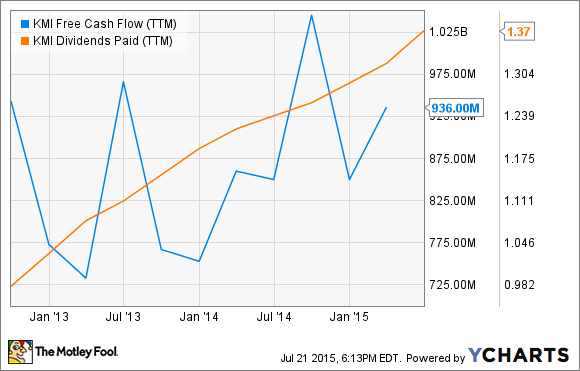 Although its dividend can be considered riskier than most, I think the company is strong enough and boasts sufficient potential to keep its raising streak alive for quite some time.

The new Kinder Morgan dividend is to be paid on August 14 to shareholders of record as of July 31.

Eric Volkman has no position in any stocks mentioned. The Motley Fool recommends and owns shares of Cummins and Kinder Morgan. Try any of our Foolish newsletter services free for 30 days. We Fools may not all hold the same opinions, but we all believe that considering a diverse range of insights makes us better investors. The Motley Fool has a disclosure policy.