American Express (NYSE:AXP) is different from most credit card companies in that it is a processor and issuer. That is, it collects discount fees for processing payments and interest on balances that customers carry on their AmEx credit cards.

This quarter, 63.3% of AmEx's revenue net of loss provisions on its portfolio came from discount fees charged to merchants. Interest income after provisioning for loan losses came to just 12.2% of revenue. 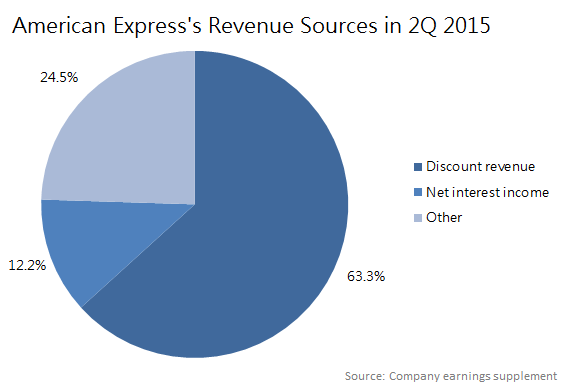 That split is not very different from its historical average. Card fees, travel commissions, and other ancillary revenue sources made up the remainder -- roughly a quarter of total revenue.

Recent headwinds
There are two problems standing in the way of growing processing volume.

The first is the loss of its Costco partnership, which Visa and Citi won from AmEx by heavily discounting the fees charged to Costco for processing customer payments. Costco members represent about 8% of American Express's billed business worldwide. Of this spending, 70% occurs outside of Costco, where American Express earns its typical fee. The non-Costco volume is the real trophy of the deal -- AmEx earned as little as 0.6% on transaction volume at Costco vs. discount rates of roughly 2.5% across its entire worldwide processing business.

Losing 70% of non-Costco volume on its Costco cards (which represents 8% of all billed business) would result in the loss of 5%-6% of total billed business on which AmEx earns its full fee. That's significant any way you slice it. If AmEx sells this book of business, it won't be able to market to these customers to keep them on an alternative card.

The second roadblock is the Department of Justice decision. The DoJ ruled that AmEx's rules that prohibit merchants from promoting the use of other cards (which charge lower processing fees) is anti-competitive.

In August, American Express will begin sending letters to millions of merchants advising them of the new rules, according to the Wall Street Journal. That could put pressure on American Express's billings, particularly if big-ticket vendors (jewelers, for example) and low-margin retailers (think gas stations) pressure customers to swipe with competing cards to save on fees. Most retailers probably aren't yet aware of the decision, but they will be soon.

Putting it in perspective
Some back-of-the-envelope figures help put AmEx's recent headwinds in perspective. Total billed business this quarter grew at a 6% rate when adjusted for foreign exchange impacts. That growth is essentially wiped out by the loss of Costco card spending at other retailers.

The DoJ decision could have a modest impact on billings. Handicapping how much is difficult to say, but I think it will be a number greater than zero. Call it 1%-2%.

Add up the 5%-6% from Costco and the 1%-2% from the DoJ, and American Express will fail to grow revenue, even if it would otherwise reach its "aspirational" target of 8% revenue growth. (The DoJ issue is, in my opinion, one of the biggest risks to American Express, given how vocal retailers are about the high cost of payment processing.)

Furthermore, interest income will almost certainly contract in 2016, as Costco card members represent roughly 20% of American Express's outstanding loans. And I haven't considered the potential for increased spending in card member rewards (to incent transaction volume) and reductions in its discount rates (to keep retailers in its network). Executives discussed increased marketing spending to offset the volume lost from Costco on the company's conference call.

When you put it all together, American Express as it sits today is a low- or negative-growth business trading at about 14 times earnings, with some risk, primarily from the impact of the Department of Justice decision, and increased member rewards and marketing spending to drive payment volume.

The wait-and-see approach, even if it results in paying a higher multiple of earnings should the DoJ decision have little to no impact on billed business, seems like the appropriate course of action. American Express is cheap by historical multiples, but historically, it hasn't faced these kinds of top-line challenges all at the same time.