Kinder Morgan Inc's (NYSE: KMI) stock price has hit a rough patch over the past couple of months, as it is down more than 20% off the recent peak as we can see in the chart below. 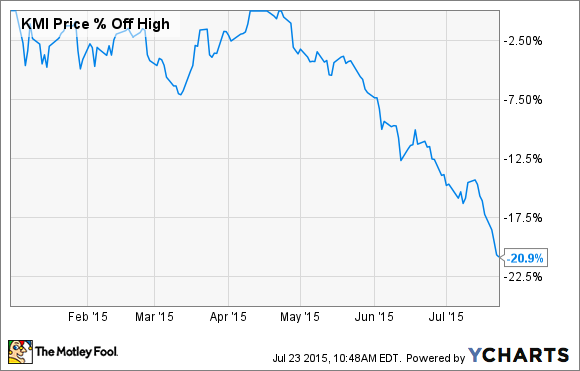 This slump is coming despite the fact that Kinder Morgan's business is remarkably solid. For 2015, 94% of its segment earnings are locked-in via commodity price hedging or fee-based contracts. That's why the company was able to deliver solid second-quarter earnings as it produced more than $1 billion in distributable cash flow enabling it to raise its dividend again. Further, the company reiterated its future growth plan and significantly bolstered its backlog of future projects.

Given that solid performance and unchanged outlook, an analyst on the company's recent quarterly conference call asked the company's management team for their thoughts on the sliding stock price. Here's the response from company founder Richard Kinder.

The market is being irrational again

Kinder started off his comments by saying,

I'm the largest shareholder and I don't like it a bit. What's the old saying, I'm mad as hell and I won't take it anymore, but I can't use the latter part of that, obviously. Now I think in the long run, markets are rational. In the short term, they can be irrational.

As the largest shareholder in the company, Kinder's net worth is directly correlated to the stock price. In fact, the most recent slide has pushed his net worth down nearly 20% to $10.4 billion according to Forbes, which is reason enough to be upset. However, it's a slide he chalks up to the market acting irrational in the short-term, as it tends to do.

This is a buying opportunity
The market's stupidity aside, he is still "very disappointed with the performance [of the stock] over the last few weeks". That said, when the market acts irrational it opens up opportunities for long-term investors. In fact, Kinder pointed out that some of the company's management team, which are all long-term investors in the company, "bought more stock" so he actually sees the dip as being "a good thing" as "it's a buying opportunity" even if the company just doesn't see a legitimate catalyst for the recent slump. In fact, just this week Kinder took his own advice and forked over $3.5 million to buy 100,000 more shares of the stock.

He then reminded investors what Kinder Morgan brings to the table. Kinder pointed out that despite the downturn in the oil market,

We're pretty able to profit and produce very nice cash flow regardless of where the commodity prices are. To me, that's what makes this a great story. When you're out there saying we're paying a 5% dividend, we're giving you 10% growth for the next 6 years, that to me is just a wonderful story based on $130 billion of enterprise value.

Here, Kinder provides three key reasons to be bullish on the company. First, it generates gobs of cash flow no matter what commodity prices do because the bulk of its income is derived from fee-based assets. Second, it then returns a huge slug of that cash back to investors via a very compelling dividend that's currently yielding around 5%. Finally, the company has a clear line of sight to grow that payout by 10% annually for at least the next half dozen years, which is quite a fete for a company of its massive size. Add it all up and the recent sell-off makes the stock look unreasonably cheap as it should be selling for a premium given what it offers investors.

Investor takeaway
Kinder Morgan's founder is very disappointed by the company's' current stock price as the recent slide makes no sense. The company's operations are strong and its growth plan remains intact. He thinks the market is being irrational and that the recent drop is a buying opportunity for investors.