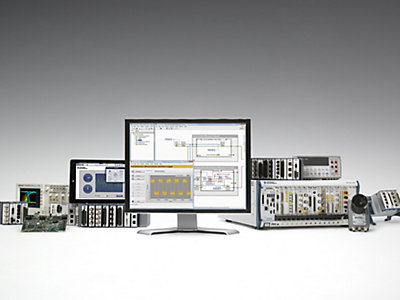 The scientific and engineering community relies heavily on equipment to help them do testing and run experiments that often lead to impressive scientific advances. One company that serves this community is National Instruments (NASDAQ:NATI), and as the overall macroeconomic environment in the U.S. has improved, so too have the testing-equipment maker's prospects. Coming into Tuesday afternoon's second-quarter financial report, though, National Instruments investors were prepared for slight declines in revenue and earnings as the company suffers through a cyclical downturn. Although its results did show some signs of weakness, National Instruments nevertheless did somewhat better on its bottom line than many had expected. Let's take a closer look at how National Instruments did and whether it can stay on a strong track for future growth.

National Instruments sees sales fall
After several quarters of posting all-time record revenues, National Instruments wasn't able to keep the pace this time around, with revenue declines of 3.5% to $301.8 million coming in slightly the $303 million in sales that those following the stock had expected. On the bottom line, though, National Instruments made up for that weakness, with net income of $24.9 million rising nearly 2% from year-ago levels and producing flat earnings per share of $0.19, topping expectations by a penny per share.

Once again, the disparity within National Instruments' two major business segments continued to show itself. The tiny software maintenance division had another successful quarter, with gains of 14%. Yet the product sales area took a big hit, with a 5% drop having a much bigger impact since the segment makes up more than 90% of National Instruments' total revenue.

National Instruments once again took a big hit from getting less business from its largest customer. The company reported getting just $10 million in orders from this single customer, down from $27 million in last year's second quarter. Still, when you take out the impact of this one client, National Instruments' biggest customers still gave the company all of its growth for the period, with big orders above the $100,000 mark climbing 9% even as smaller orders fell between 2% and 5%.

Looking region by region, National Instruments is finally seeing some weakness in some areas of the world. Even on a constant-currency basis, sales to East Asia and Emerging Markets both fell by double-digit percentages, outweighing 9% gains in the Americas and a 14% rise in Europe. The strong dollar wiped out Europe's gains in dollar terms, though, and exacerbated declines in other parts of the world.

National Instruments felt confident about its future prospects. CEO James Truchard said, "The strength of our business model allowed us to adapt to the impact of the stronger U.S. dollar during Q2, allowing us to deliver record non-GAAP operating profit." Truchard also remains confident about the internal development efforts that National Instruments has made and their ability to translate into long-term profitability.

What's next for National Instruments?
Truchard is especially optimistic about work that it has done in the telecom arena. As he put it, "I am particularly excited about our early success in 5G wireless, where our innovative technology platform is enabling researchers to prototype algorithms for next-generation wireless networks."

Still, the strong dollar will likely weigh on National Instruments' results for at least one more quarter. The company believes that currency impacts will cost it about seven percentage points of revenue, guiding third-quarter sales to a range of $290 million to $320 million. That's in line with the $311 million in revenue that investors currently expect, as are calls for $0.14 to $0.26 per share in earnings.

National Instruments' stock didn't respond to the news, remaining unchanged in the first couple of hours of after-market trading following the announcement. For now, investors seem to understand the challenges that the equipment-maker faces and are willing to give the company a chance to get through these tough conditions. In time, though, National Instruments will have to demonstrate the value of its efforts to find new growth and overcome the strong dollar.