Windows 7 and 8 users needed to preregister to download the free upgrade on its first day of availability. I had done that, which meant that some of the new OS had already downloaded to my computer. At least that's what the company claimed would happen and it likely did as my machine went through a lengthy update the day before launch.

When I logged onto my laptop on the morning of the 29th, I was greeted with a small Windows icon in the icon grouping on the lower-right part of my screen. Clicking this brought up a screen that showed my computer was compatible with Windows 10. It did not offer a button that said "upgrade." Clicking around brought me more info, but it did not start the download.

It was only after exiting that screen and opening it again that the upgrade button showed up so I could start my journey to Windows 10.

Hitting the upgrade button began the process, which looked like any other Windows update. A screen appeared (seen above) that showed the percentage that had been downloaded and things seemed to be moving -- if not quickly, at least steadily. Unfortunately, my machine was only configuring the update and the actual download process had not even begun. 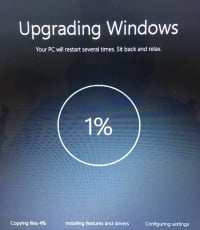 Once the configuration completed, a new screen appeared that also showed progress on a percentage basis. This time, I was told to "sit back and relax."

The new screen also said my machine would restart several times, which it did on its slow path to completing the update over my high-speed office connection. The percentage meter showed progress but did not move in any predictable way. It might jump from 5% to 14% in a minute and then get stuck there for 10.

But as Tom Petty sang, "The waiting is the hardest part," and Microsoft handled most of the work while I did my best to sit back and relax.

And here comes Windows 10
What began at 8 a.m. appeared to complete at 9:10 a.m. The dial hit 100% and my screen flipped to an updated login screen. After I entered my credentials, I was greeted with another period of waiting while the system configured itself.

This delay, which did not feature a percentage-based countdown clock, took another nine minutes. At 9:19 a.m., about one hour and 20 minutes after I started, I had my free, fully installed upgrade.

What happened next
Windows 10 was not unfamiliar to me as I have been using it occasionally on a secondary machine as part of the Windows Insider Preview program. The preview had evolved over the last few months before locking into the final, launch version I now had on my main computer.

Still, despite having used the OS before, it was jarring to see its bolder lines and crisper icons appearing on my main computer. Most notable (and welcome) was the return of the Start Menu, gleaming in the bottom right-hand corner of the screen next to a prominent search bar.

Another major, but subtle change is the slightly different "e" icon that now launches the new Edge browser rather than the traditional Internet Explorer.

It's a new Windows, but a familiar one that opens up on a desktop screen that looks like the OS always has instead of the tablet-like "Metro" interface, which was the default on its predecessor. It's a new operating system, but Windows 10 feels like a visual improvement to Windows 7 rather than a successor to 8.

There is no learning curve. It's an OS that works as you would expect it to with some easy-to-find bells and whistles on the Start Menu -- including live tiles -- which are useful as well as intuitive.

How was the process?
While it was slow going and getting started was a tiny bit harder than I expected, the upgrade process was painless. It would have been nice if the company offered a tool that estimates how long it will take (factoring in each person's download speeds and the demand on the company's servers at that time), but the suggestion that I sit back and relax made it clear: It was not going to be a fast process.

But that's really a minor quibble. You can start the download, head out for a long lunch, and when you return all you have to do is log-in, wait about 10 minutes for configuration, and then you are done.

Microsoft has a winning new OS here, but it also succeeded in delivering it without much hassle. That's two victories in a way and the company deserves credit for both. Windows 10 reverses the mistakes of Windows 8 and getting it installed requires little more than a few clicks and some patience.