Reading all the doom and gloom reports from companies and analysts about today's oil and gas market can really bring down your day. So when a company reports some good news, it feels like a nice breath of fresh air. Enterprise Products Partners (NYSE:EPD) provided that energy today as its quarterly earnings report showed that the company is handling itself just fine through the doldrums of the American Energy market. Let's take a quick look at why the numbers for Enterprise looked good this past quarter and how the future could look even better.

By the numbers
A major misconception conveyed in most media reports about Enterprise Products Partners' -- and most master limited partnership listed pipeline companies for that matter -- earnings is too much focus is on the company's revenue and per share net income. These numbers are actually pretty useless to compare the company's quarterly results. One thing that seems to get lost in the mix so much is that close to 85% of Enterprise's service contracts are negotiated such that they guarantee a fixed operating margin -- a figure similar to EBITDA. So the company could generate $1 billion or $100 billion in revenue in any given quarter, but its operating margin will be very similar from quarter to quarter.

This fact was pretty evident this past quarter. Even though total "revenue" declined by 43% compared to the same quarter last year, its operating margins actually increased 3% overall thanks to strength in its crude oil & petrochemical segments, as seen in the following chart. 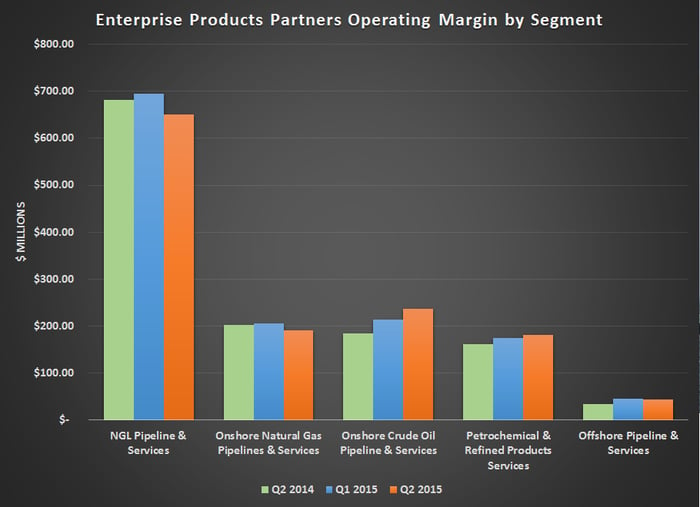 The two business segments that saw operating margins decline -- NGL and natural gas -- mostly came from the company's processing services. Total natural gas volumes declined slightly year over year as well as total volume of Enterprise's equity interest NGL processing. Another component that hurt these segments harder than others was that smaller portion of operational margin that isn't set with fixed fee contracts.

Fortunately, some of the weakness in these segments was offset by new developments such as the new contributions from its Oiltanking acquisition -- about $14 million -- and the start-up of several new pipelines.

Overall, increased operating margins led to a 5% increase in distributable cash flow to $988 million. This gave the company a distribution coverage ratio of 1.3 times for the quarter even after its 44th consecutive distribution increase. So far this year, the company has generated about $532 million in excess cash that will be put to use in funding projects and paying down debt.

What the future holds
It's tough to say what the future holds for oil and gas prices and how production in the US will be affected over various time horizons. After all, actions taken today will have impacts in the short, medium, and possibly long term in one way or another. Some of this could impact Enterprise, some might not.

One thing that does hold promise for Enterprise in the near term future, though, is that it is about to bring a bunch of new projects online that will boost total operating margin. So far this year the company has seen about $300 million of new projects start commercial operations. In the second half of 2015, though, it plans to bring on another $2.4 billion in projects into service, including its large export capacity expansion in the Houston ship channel and its massive Aegis pipeline that will bring natural gas liquids from the Marcellus/Utica shale formations in the Northeast to the Gulf Coast.

Once online, these could provide a huge boost to distributable cash flow and could provide management with the opportunity to significantly increase distributions to shareholders.

What a Fool believes
Despite what the revenue and earnings numbers might say for Enterprise Products Partners, this quarter was just another solid performance from a rock solid company. Operational margins and distributable cash flow are up, which is what really matters for this company anyway. If Enterprise can maintain these sorts of quarterly performances in the midst of a downturn in the oil and gas market -- and there doesn't appear to be a reason why it can't at this point -- then my only question is, how can this company not be on any investors' radar right now?