The first number is 9.7%. This is the rough return on equity Prospect Capital needs to achieve in order to pay its current dividend to investors. If the company can earn this rate of return on its net asset value, it can afford to pay you its current dividend, which amounts to $1 per share, per year.

The second number is 11.4%. This is the approximate return Prospect Capital needs to earn on its assets in order to earn its dividend based on its current capital structure and fee arrangement. (The actual number is a bit higher. The 11.4% figure only reflects the fee structure and its costs of capital. The other, much smaller, expenses like administration expenses were ignored in calculating this figure.)

With these two numbers in hand -- 9.7% returns on equity and 11.4% return on assets -- you can start to make sense of a few issues that affect Prospect Capital and its earnings power.

1. The low-yielding assets
Prospect Capital has a boatload of low-yielding assets on its balance sheet. I calculate that it had roughly $813 million of assets at fair value yielding less than 8% as of March 31. It has sold a small portion since the end of the last quarter, but it still has a long way to go.

Check out Prospect Capital's latest 10-Q filing, and on page 146 you'll see that its all-in weighted average cost of debt was 5.86% last quarter. Prospect Capital's management fees alone amount to 2% of assets per year. Thus, when Prospect Capital makes an investment that yields less than 8% per year, the borrower and the management team benefit from the transaction -- but not you, the shareholder. 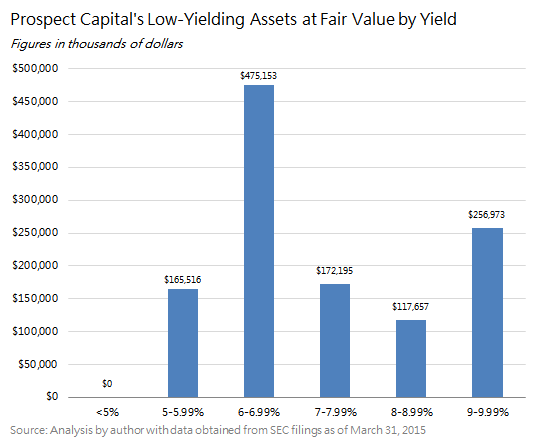 The borrower benefits because Prospect Capital is giving them a great deal, basically passing on a loan at its own borrowing costs. The management team wins because it gets a fee equal to 2% of any assets on the books. The equity investors lose because they're supporting a debt investment that produces zero (even negative in some cases) profits for shareholders.

Remember, Prospect Capital needs a return of more than 11.4% on its assets to earn its dividend. Having low-yielding assets on this high-cost balance sheet destroys value for the equity investors. It's time for the freeloaders to find a new home. And though they're moving out, the pace has been slow -- it's been a little over a year since Prospect first talked about optimizing its portfolio.

2. Management fees
Prospect Capital has one of the most lucrative fee structures for its management team. Its 2% base fee on assets is one of the highest, and its hurdle rate of 7% -- the minimum annual return for the manager to earn incentive fees for good performance --  is one of the lowest. Prospect Capital Management, the external manager, receives 20% of the returns in excess of 7% annually, which is calculated by dividing its net investment income by total net asset value.

Bulls tend to see any criticism of the fee structure as an attack on management's ethics. But, really, when people complain about the fees, they're making a logical assessment of the business. The higher the fee Prospect Capital pays to its managers, the more it has to earn on its portfolio to generate competitive returns.

Let's keep it simple. Suppose the management fee were 1.5% of assets per year instead of 2% per year. Prospect's required return on assets would fall from the current 11.4% to 10.9%. That may not seem particularly significant, but you can bet it matters to its borrowers. Sophisticated corporate borrowers aren't in the business of paying an extra half-point on a $100 million loan to subsidize their lender's high-cost business model.

Given the company's cost structure, it would be wonderful to be in direct competition with Prospect for any given deal.

Prospect is making some progress. It has sold some lower-yielding assets, although its recent 497 filings suggest that it has made some new, lower-yielding investments, too. Progress on the management fee will be difficult, given that the external manager would have to give up millions of dollars per year -- which has an instantaneous impact on its bottom-line profits -- if it were to make a fee concession.

But characterizing these concerns as simple disdain for management misses the point. Its high cost of capital, which is due largely to its financing decisions and its fees, puts it at a competitive disadvantage relative to peers.