The online coupons company is facing challenges as the mobile revolution gains steam.

RetailMeNot (SALE) stock was down 32% at 11:20 a.m. Wednesday after the company announced disappointing earnings for the second quarter of 2015 and management cut its guidance for the rest of the year.

The online coupons company is facing considerable challenges since a search-engine algorithm change in May of last year has been hurting organic search traffic for RetailMeNot. Besides, even if the mobile boom is generating big opportunities for traffic growth, monetization is much lower in this segment, and this is another negative factor weighing on the business.

Key top-line figures
Total net revenues declined 11% year over year to $53.2 million during the second quarter of 2015. The number came in below Wall Street expectations for $57.4 million in total sales, analysts were on average expecting a 3.5% decline in revenue, so the magnitude of the decline was considerably larger than expected. 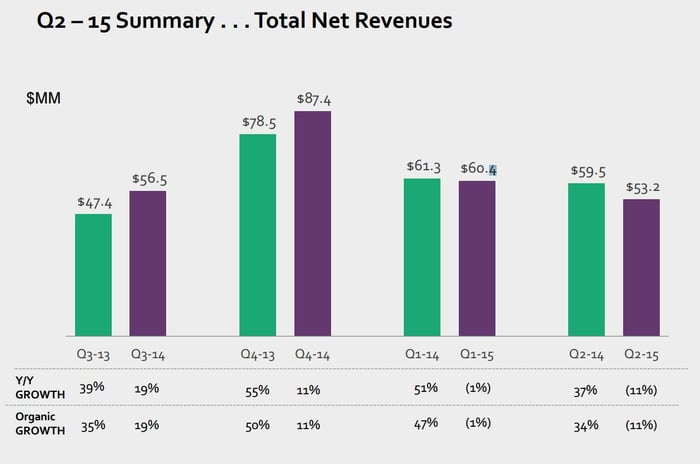 The company is delivering strong growth in mobile. But falling revenue from desktop is inflicting considerable damage on RetailMeNot's global sales, since desktop still brings in most of the company's revenue.

Mobile revenue increased 91% to $4.9 million during the quarter, accounting for a modest 9% of total sales. Advertising and in-store revenue was another strong spot, with sales from this division increasing 72% to $9.6 million, but this business represents only 18% of total net revenues.

RetailMeNot is still making 73% of total revenue from desktop, a segment where the company also includes tablet transactions. Sales in this division fell by a worrisome 25% to $38.6 million during the second quarter of 2015 versus $51.3 million in the same period last year.

Traffic and monetization
Total visits in the quarter were 164 million, up 6% versus the second quarter of 2014. Management attributed the disappointing traffic growth to weakness in organic search traffic, which affected growth on both desktop and mobile websites.

Since consumers are increasingly inclined toward mobile versus desktop, this is having a big impact on traffic sources. Desktop visits in the quarter were 97.2 million, a decline of 16% from 115.4 million in the same period last year.

Mobile visits, on the other hand, grew by a vigorous 72% to 66.8 million from 38.9 million in the year-ago quarter. Mobile visits currently account for 41% of total visits, a big increase from 25% of total visits coming from mobile in the second quarter of 2014.

RetailMeNot has 39.7 million worldwide subscribers to emails as of the end of the quarter, an increase of 74% year over year.

Monetization declined during the quarter, mostly because of falling revenues per visits in desktop and a growing share of traffic coming from mobile, where monetization rates are generally lower. RetailMeNot made $0.27 per visit in the second quarter of 2015 versus $0.35 per visit in the same period last year.

RetailMeNot produced $0.40 per visit in desktop versus $0.45 per visit in the year-ago quarter, which the company attributed to softness in organic visits and deterioration in commission rates. On the other hand, mobile net revenue per visit grew 11% to $0.07 due to improved conversion as consumers shift to larger-screen devices.

Reduced guidance
Analysts were expecting a net gain of $0.14 per share, but the company reported a GAAP net loss of $0.03. Adjusted earnings per share came in at $0.09 per share, still a big disappointment.

Even worse, management cut its guidance for the third quarter and full year 2015. The company now expects revenue during the current year to be between $231 million and $239 million, down from its earlier guidance of $275 million to $285 million. Wall Street was on average forecasting $280.6 million in total sales over the year, so the new guidance is considerably below expectations.

RetailMeNot expects adjusted EBITDA -- earnings before interest, taxes, depreciation and amortization -- in the range of $56 million to $64 million for the year, down materially from a previous guidance of $92 million to $100 million.

Investors in RetailMeNot are facing difficult times as the company tries to adapt to the mobile computing revolution and changing dynamics in search. The way things are going, it looks like there are strong reasons to expect sustained volatility over the middle term.

Why RetailMeNot Inc's Stock Fell 15% in May