Are investors right to bid up the stock ahead of its first NDA submission?

What: Shares of ACADIA Pharmaceuticals (ACAD 1.36%), a biopharmaceutical company with a focus on neurological and central nervous system disorders, rose more than 17% in July, according to data from S&P Capital IQ.

So what: Excitement in the company continues to build, as investors should hear soon about the timing of the company's first New Drug Application, or NDA, submission to the FDA for Nuplazid, which has been studied as a treatment for Parkinson's Disease Psychosis. Investors were initially expecting a submission in the first quarter of the year, but the company decided to delay its submission until the second half of 2015, stating that they needed more time to prepare for commercialization.

Investors appeared to have shrugged off the disappointing news of a delayed submission, as the stock continued to roar higher during the month.

Now what: Acadia has been an absolute dream to own during the past five years, and with the strong movement in July, shares are now up a mind-boggling 3,940% over that time period. You can bet that the company's insiders are doing another happy dance to celebrate. 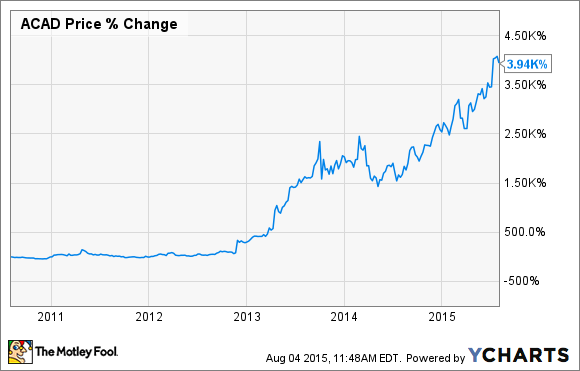 A successful submission for Nuplazid would be a significant milestone for the company, as it would represent a major step in its transition from a clinical-focused company to a commercial organization. If the company can successfully make the transition, the market opportunity for Nuplazid appears to be huge.

Nuplazid has been granted breakthrough therapy designation by the FDA. When you consider that there's currently no other drug approved to treat Parkinson's Disease Psychosis in the U.S., it's completely understandable why investors are so excited about the company's prospects. Peak sales estimates for the drug are currently hovering around $2 billion.

That peak sales estimate could grow, as well, as the company is currently running phase 2 trials using pimavanserin, which is the active compound in Nuplazid, as a treatment against other neurological disorders like Alzheimer's Disease Psychosis and Schizophrenia, as well. If that peak sales estimate proves to be conservative, it could make Acadia's current $4.8 billion market cap look quite small, which could indicate futher bullish movement for the stock.

Acadia has been a home-run stock for long-term investors, and with the NDA submission right around the corner, it's easy to see why investors are so excited. If the company can successfully get approval for and commercialize Nuplazid, as well as help the drug achieve its estimated market potential, I see no reason for the current bull run in the stock to end anytime soon.