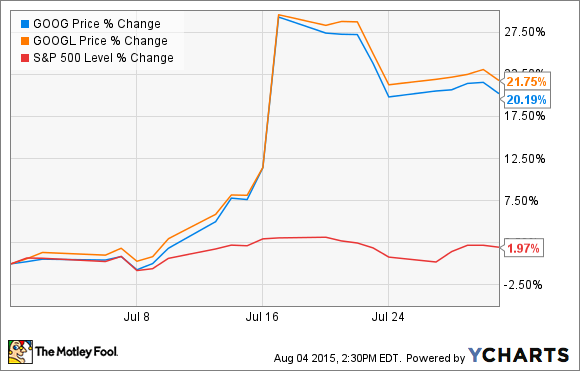 What: Shares of Google (NASDAQ:GOOG) (NASDAQ:GOOGL) soared in July, according to data from S&P Capital IQ. The GOOGL ticker, denoting Google's Class A shares with voting rights, surged 21.8% higher between the start of the month and the end. The non-voting Class C shares trailed just behind, gaining 21.2%.

So what: Google's second-quarter sales rose 11% year over year to $17.7 billion, in line with analyst expectations. If not for currency headwinds, revenues would have surged 18% higher. On the bottom line, Wall Street firms were expecting earnings of $6.75 per share. Google stomped that target with EPS of $6.99.

Porat brought her banking experience to the earnings call, leaving investors and analysts feeling as if Google had suddenly grown up. The company has been known for throwing platefuls of pasta at the proverbial wall to see what sticks, but Porat has different ideas:

During that crucial call, she promised to keep Google's experimental projects within 10% of the company's overall resources. Using a 70/20/10 framework, most of the company's cash and human resources go toward supporting core businesses such as search, YouTube, and Android. The next 20% will support related ideas -- ambitious expansions of existing products and services. Only after these bases are covered will Porat greenlight risky or expensive launches.

"The framework keeps us focused on big ambitions across the company, but given the success of the core business, I think it's fair to say the 10% is a stretch goal for now," Porat said.

That's the fuel for last month's fires under Google shares. The iconoclast is starting to behave more like a seasoned business veteran, and Porat's handholding is a major component of that transformation. The second-quarter report simply gave her a big stage from which to show off this new direction.