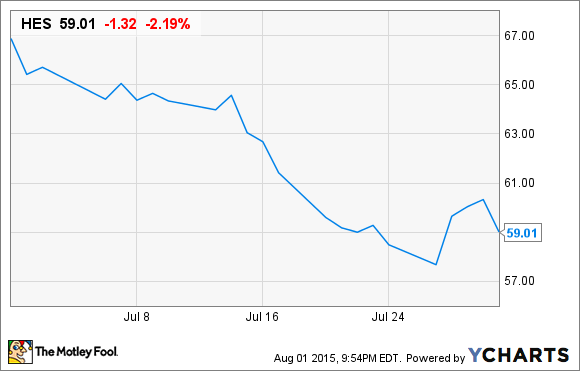 Shares of independent oil and gas exploration and production giant Hess (NYSE:HES) tumbled 12% in July, based on data from S&P Capital IQ, following weakness in the overall crude market and the release of its second-quarter earnings results.

The key driver for most energy stocks over the past year has been the declining price of crude oil. West Texas Intermediate per barrel prices fell from just shy of $60 to begin the month to roughly $47 by month's end, while Brent crude saw a slightly less stomach-churning 10% drop in per barrel prices. Lower prices mean oil producers can choose to either produce even more in order to continue meeting revenue and profit expectations at the expense of margins, or they can scale back production in the hope that lower capital expenditures and supply help buoy their margins and overall crude prices.

The other problem was Hess' mixed second-quarter results. For the quarter, Hess witnessed its revenue tumble to $1.94 billion from $3.58 billion in the year-ago quarter, although the year-ago quarter included $779 million in gains from an asset sale. On a sequential quarterly basis, Hess' revenue improved by $415 million. Overall, oil and gas production increased dramatically to 391,000 barrel of oil equivalent per day, or boepd, driven by its Bakken shale rigs where production surged nearly 50% to 119,000 boepd from 80,000 boepd in the prior-year quarter.

Is the sun rising or setting on Hess? Source: Flickr user Derek Gavey.

The "mixed" aspect of Hess' quarter came from its bottom-line and CapEx forecast. For the quarter, Hess lost an adjusted $0.52 per share compared to the $1.38 in EPS it generated in Q2 2014. Although this loss was $0.21 less than expected, losses are a tough pill for Hess shareholders to swallow after regularly netting $1+ in EPS per quarter.

More importantly, Hess announced major cost reductions, choosing the latter path mentioned above of reducing costs rather than attempting to rapidly expand with crude prices on the decline. Hess announced cuts to its Bakken rigs of more than 50% (down to eight rigs from 17), while also announcing that only 88 new wells will be brought on line during the second-half of 2015 as opposed to a prior forecast of 137. Hess anticipates that production may fall as much as 12% in the Bakken shale in the second-half, and that production weakness may continue into 2016.

Do Hess' aggressive CapEx cuts make sense in today's weaker crude environment? I think so, and have never been a huge fan of boosting production in the wake of weaker crude prices in order to satisfy investors on a quarter-to-quarter basis. Tightening its spending could allow Hess to return to profitability by as soon as the second-half of 2016, albeit the days of $1+ in EPS per quarter are still a long ways out.

But does this mean you should buy Hess now that it's taking these drastic measures? Personally, I'm not in the optimists camp just yet. Hess is going to have a hard time standing out without a substantial rally in crude prices. Although its balance sheet has improved notably with the sale of its 50% interest in Bakken Midstream that generated $3 billion in cash, there simply aren't many catalysts to excite investors about a company that may not earn $1 in full-year EPS until 2019. For now, I'd suggest sticking firmly to the sidelines.