Last month, Brad Plummer of Vox interviewed Noah Deich, the founder of the Center for Carbon Removal, which aims to bring various groups together to determine if humans can remove carbon dioxide directly from the air. In addition to transitioning to low- or zero-carbon technologies that avoid CO2 emissions, direct air capture technologies would increase our chances of limiting warming to the internationally agreed-upon ceiling of 2 degrees celsius. After all, not all emissions come from point sources such as industrial plants; they also come from distributed sources such as agriculture and transportation. But, as Deich said, "No one has the answer right now."

Well, a Canadian-based company called Carbon Engineering might have something to say about that. The company is designing a new type of industrial facility that could capture large amounts of CO2 from the air with many times the efficiency of natural vegetation. Better yet, the CO2 could be purified and sold to fuels or chemical manufacturers to produce ultra-low carbon products to monetize the process.

Is it really possible to suck CO2 out of the air to make climate change suck less? I recently spoke with Business Development Manager Geoff Holmes to find out and determine what it could mean for investors.

Technology at a glance
Carbon Engineering is developing and testing a relatively simple design for direct capture of CO2. As you can see in the rendering above and directly below, such a facility would consist of several stories of large fans that would send high volumes of air through membranes directly inside. A special liquid flowing through the membrane would capture CO2 from the air and settle in tanks below the facility. Simple chemical reactions would remove the CO2 from the capture liquid, while also regenerating the capture liquid for continued use. 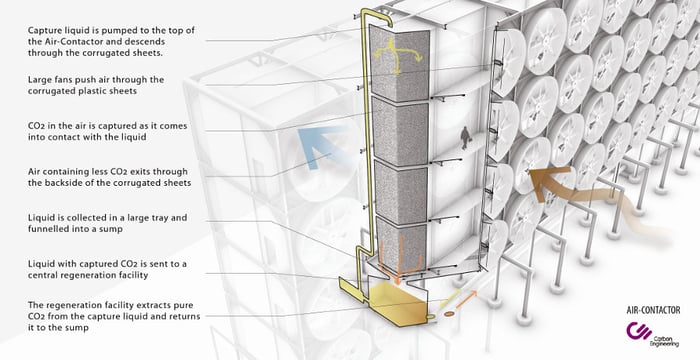 The proposed facilities would source the required energy and heat from natural gas generators, but capture CO2 emissions from combusting the fossil fuel. The energy-efficient process would end up generating roughly one-third of its total CO2 output from its own energy use, while the remaining two-thirds would come directly from ambient air. Additionally, such facilities could potentially be connected to wind and solar electricity production and be used for energy grid load balancing applications (using excess renewable energy that the grid cannot handle), making renewable energy generation carbon negative.

While the future is often more awesome than we can imagine, there's still a long way to go before direct CO2 capture becomes a reality. Carbon Engineering is in the midst of collecting data from a fully integrated pilot facility. Once completed later this year, the company hopes to build a 50,000-metric-ton-per-year facility before the end of the decade. Future facilities could reach annual capacities of 1 MT, or the equivalent of removing about 250,000 cars from the road.

Cool. So, how could this affect investors?
Carbon dioxide is currently a low-value, commodity product, so selling captured CO2 isn't the most lucrative business. However, we have come to villainize CO2 and neglect its role as a potential chemical feedstock. As I've written in the past, CO2 can be converted directly into valuable chemicals and intermediates ranging from plastics to rubbers, from sugars to ultra-high-value food ingredients in much the same way petroleum is today.

By supplying purified CO2 that originated in the atmosphere, Carbon Engineering could help any number of customers offset their climate footprint while simultaneously generating revenue. For now, the company is very interested in low- or zero-carbon fuels. That's an incredibly difficult market to penetrate, but there is also an incredible amount of interest in it.

Last week, United Parcel Service announced a new program that will see it purchase up to 46 million gallons of renewable diesel in the next 36 months. Compare that to just 3 million gallons of renewable diesel the company has used to date. The new program should put the company well on its way to driving 1 billion miles on fuel-saving technologies by 2017 and sourcing 12% of its ground fuel from renewable sources by 2018.

This Boeing 737 will likely take off with renewable fuels before the end of the decade.

Meanwhile, The Boeing Company -- and the entire global aviation industry -- has ambitious plans to reduce its carbon footprint and fuel costs, which make up roughly one-quarter of the price of a $300 airline ticket. The industry aims to achieve carbon neutral or negative growth on its way to emitting 50% less CO2 in 2050 compared to 2005 levels. Large investments recently made in renewable diesel and renewable jet fuel production could provide a great start, while future fuels manufactured from direct CO2 capture could bring the goal home before mid-century.

Will direct CO2 capture really work?
I'll be honest, when I first heard about the basic idea of this technology platform, I thought it equated to wishful thinking. But after speaking with Holmes, reading about the process, and reviewing early data from pilot operations, I do think this crazy idea could be feasible. The relative simplicity of the design -- enabled by brilliantly simple chemistry -- bodes well for the company. There's plenty of work left to do, but so far, so good.

The heightened focus on sustainable, low-carbon growth from major global brands such as Audi, Bayer, United Parcel Service, and Boeing offer numerous potential catalysts for direct CO2 capture. First, a company needs to prove that the technology can work economically at scale. There may be hurdles and pivoting business strategies, as in any emerging industry, but Carbon Engineering is an impressive young company to keep an eye on. It may not be long before one of your investments becomes a future partner.