After the results were announced, CEO Jeffrey Katzenberg and his executive team held a conference call with investors to discuss what's working and what's not. Here are five key points that management made in that call.

Success in theaters
"Feature film revenues increased 26% to $88 million primarily driven by Home's performance in the worldwide theatrical market. [S]egment gross profit was $32 million, reflecting gross margin of 36% largely driven by contributions from [How to Train Your Dragon 2]  and higher margin titles within our library."
-- Chief Financial Officer Fazal Merchant 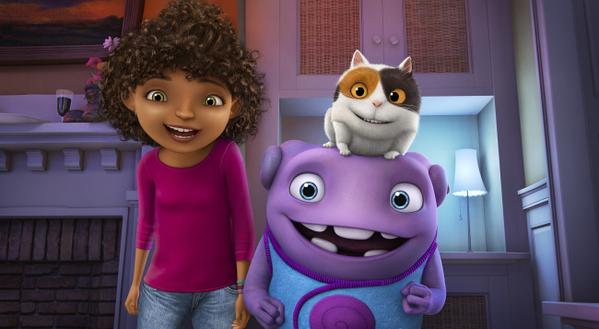 Home, DreamWorks' only 2015 film release, is solidly profitable. The film has grossed $400 million in global box-office receipts, making it the biggest non-sequel hit since 2013's The Croods.

Home has also started kicking in profits through the rental market. In fact, it's selling digital downloads at a faster pace than the blockbuster How to Train Your Dragon 2. On the other hand, last year's disappointing Penguins of Madagascar film isn't doing as well in the digital market, but it still passed into profitability this quarter.

Success on television
"Our television segment revenues more than doubled year-over-year and remain on track to achieve our previously stated full-year 2015 guidance."
-- Katzenberg

DreamWorks' TV business consists mainly of episodes for broadcast on Netflix's platform. And the output deal between the two companies seems to be going well.

Katzenberg said the newly launched Dragons: Race to the Edge series is one of Netflix's most popular originals, and that success put DreamWorks at 5-for-5 in terms of hit shows delivered to the streaming giant. Management thinks the company will earn between $200 million and $250 million from TV operations this year, with a hefty gross profit margin north of 30%. DreamWorks' deal with Netflix comes due for renewal by 2017, so investors will want to watch for any news around those negotiations.

Weakness at retailers
"Driving growth from the investment we've made in our consumer-products organization is taking longer than we initially envisioned."
-- Katzenberg

DreamWorks' overarching strategy is to transition into a diverse family-entertainment company that isn't completely dependent on the box-office results of a handful of films in any given fiscal year. That goal took a step back this quarter, when its consumer-products division stumbled badly. Sales fell 30% as profit plunged to $2 million from $7 million a year ago. Worse yet, management sees the weakness continuing at least through the next few quarters: The company cut its segment sales outlook in half to $70 million.

What happened?
"This is new territory for us and for everybody else here."
-- Katzenberg

Outlook
"We remain on track to deliver on our guidance regarding full-year operating income excluding restructuring charges."
-- Merchant

Still, management thinks the company can break even in 2015 -- with the important caveat that the profit calculation doesn't include restructuring costs that amount to $57 million through the first half of the year.

Next quarter is expected to be a weak one, as marketing expenses jump to build support for the fourth-quarter holiday TV lineup. But management believes things will improve heading into the end of the year, as DreamWorks puts the final touches on its two feature films of 2016, Trolls and Kung Fu Panda 3.