Twitter (NYSE:TWTR) has just made good on a promise that it made in June: it is removing the long-standing 140-character limit on direct messages. Symbolically, this change was announced on the very same day that Dick Costolo said he would be stepping down as CEO. Costolo had not been executing the company's "total audience" strategy while also failing to deliver on product improvements.

The company has been trying to strengthen its position in the intensely competitive messaging market, with little success to show for it. Meanwhile, Facebook (NASDAQ:FB) Messenger is well on its way to becoming its own distinct platform ripe with monetization possibilities. Removing the 140-character limit from direct messages is undoubtedly an improvement. The company says that it wants to allow users to have robust private conversations.

At the same time, Twitter is very clear that the "public side" of Twitter is not changing and public tweets will continue to be limited to 140 characters. That's a mistake.

Think about that for a second. That's perhaps one of the most oxymoronic characterizations imaginable. SMS is a remarkably antiquated technology, while the Internet is one of the fastest-evolving technologies ever created.

Removing the 140-character limit on public tweets would dramatically improve the core product, which is something that management has been talking an awful lot about lately. Twitter seemingly has its own reasons for still embracing its 140-character limit, and by extension SMS, but they aren't very good.

Chasing the past into the future
If anything, it might even seem that Twitter is heading the wrong way. In April, the company said it would begin including "SMS fast followers" in its MAU total. SMS fast followers are users that access the site exclusively from feature phones through SMS text messages. These users are predominantly located in emerging markets. Not only does the move sound like an arbitrary way to pad its MAU figures, which continue to be a source of investor disappointment, but it also serves as evidence that Twitter is still very much attached to SMS. Why?

This strategy is again oxymoronic. Twitter is anchoring itself to the past with the hopes of positioning itself for the future. Considering Twitter's extremely strong global brand awareness, there's a very good chance that an emerging market user that adopts a smartphone would probably check out Twitter eventually anyway, so this premature engagement strategy is misguided since it's hindering Twitter's ability to improve its most important product.

An existential crisis?
For all intents and purposes, the 140-character limit on public tweets is now completely arbitrary, and it arguably hurts the user experience. How many times have you seen someone go on a lengthy diatribe, such as the 30-tweet long one that Tinder went on this week in response to a negative article published by Vanity Fair? 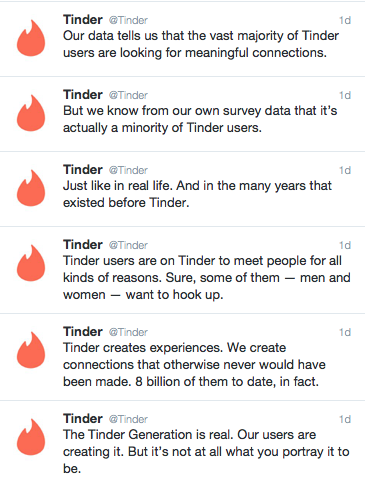 This is the consequence of the 140-character limit. And when these conversations are presented in reverse chronological order, mixed in a stream of other tweets, it's easy to see why Twitter's platform is considered less than approachable to the average person. Compare that to reading a single, lengthy post on Facebook, and you be the judge as to which product is easier to use.

Sure, the 140-character limit is ingrained into the Twitter culture, and potentially provides some quaint facade of differentiation. Removing the limit could pose an existential crisis. But more importantly, investors don't tend to put a whole lot of value on quaint, particularly when it's getting in the way of product usability and financial performance.

In tech, to adapt is to survive
Tweets can already include other types of rich content, such as photos, videos, Vines, emojis, gifs, links, and more, so clearly Twitter wants to adapt with the times. Yet, Twitter's hesitance to remove the 140-character limit since it wants to cling to SMS standards also represents an unwillingness (or inability) to adapt, which is effectively a death knell for any tech company.

As it stands, I can't think of a strategically viable reason to keep the 140-character limit on public tweets. If Twitter ever truly hopes to win over the mainstream user, it needs to stop limiting its core product. If Twitter's not careful, it could be fast following SMS into technological irrelevance.