For credit card companies like American Express (NYSE:AXP) and Discover Financial (NYSE:DFS), reward programs have become an integral part of the business model. From cash back on purchases to airline miles, rewards programs incent spending, which in turn creates swipe fees and balances on which card companies collect interest.

On one hand, investors would like to see rewards spending grow. American Express spent roughly $1.8 billion on card member rewards last quarter, which brought in $4.9 billion of discount revenue from processing payments. Investments in rewards are lucrative, as discount revenue drives the business.

On the other hand, however, rewards have become a bit of a problem. Consumers are accustomed to receiving and redeeming rewards that the natural result is that customers demand more and more from their cards.

Rewards are here to stay
If you want proof of the permanence of credit card rewards, a quick walk through American Express' historical financial filings will tell you everything you need to know. In every report, the company publishes its "ultimate redemption rate," or the percentage of rewards it expects customers to actually redeem.

In recent history, that percentage has only gone up, most notably in the years following the financial crisis. Though American Express' cardholders may be the heaviest spenders of any card customer, they're also very interested in actually collecting on their rewards for the purchases they make. 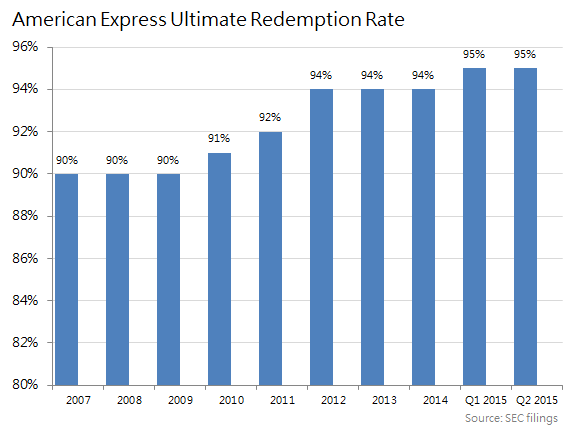 This isn't just an American Express issue. Discover has also increased its expectations for customer rewards, and noted their importance in driving spending on its network. Last year, the company eliminated reward expiration in response to customers who preferred rewards that would never expire, even if the rewards were smaller. It then reversed the entirety of its so-called "forfeiture reserve," an accounting item that kept tally on how many of its customers' rewards would never be redeemed, effectively suggesting all future rewards would be redeemed in full.

Similarly, Capital One Financial doesn't break out its rewards assumptions, though it does note in its annual report that it assumes "the vast majority of all rewards earned will eventually be redeemed."

On one hand, this presents opportunity. It's unlikely that redemption rates will rise to 100% as quickly as it jumped from 90% to 95% or that they ever will reach 100%.

But what this absolutely does mean is that customers are more focused on rewards than they have ever been. This favors the closed-loop networks like American Express and Discover, which capture the entirety of the revenue from each transaction, and can thus afford to offer bigger rewards to incent spending. It also generally favors the company that generates the most revenue per dollar of spending: American Express.

It does point, however, to a somewhat problematic trend: Consumers are used to getting paid to use their card. Given the increase in redemption rates, it's not a substantial logical leap to assume that rewards may be overtaking other traits -- brand, and service, for example -- as the main criteria customers use for selecting a credit card.