Disney (NYSE:DIS) has created a Comicon-like event, D23 Expo, where it unveils new movies, updates to its theme parks, and other news to a swooning crowd of its biggest fans.

This year's event continued that tradition, and those in attendance were rewarded with huge news regarding the company's theme parks and its plans for some of its most iconic brands. Some of the announcements were complete surprises, and others provided hard news where previously rumors had run rampant.

It was a very busy D23, and some of the news that came out of the show had fans of various Disney properties wondering exactly when they should get in line both at theaters and at the company's theme parks.

Star Wars is coming
Perhaps the biggest news out of D23 was that the company plans a massive expansion of both its Disney World and Disney Land theme parks, with each getting a land themed to Star Wars. This has long been rumored -- especially for the Florida property, where the Disney's Hollywood Studios park has long been overdue for an overhaul -- but the scale of what the company has planned was a bit shocking.

The new Star Wars-themed lands will be the biggest ever single-theme expansion, at over 14 acres each. DHS will get the Florida version, while the Disneyland Park will be home to the California take on the "galaxy far, far away." The parks will include a revamped version of the current Star Tours attraction, with new experiences incorporated from the upcoming Star Wars Episode VII: The Force Awakens as well as other signature rides and experiences the company detailed in a press release.

There will also be a ride at each park that lets users take control of the Millennium Falcon, and one that involves characters from The Force Awakens. 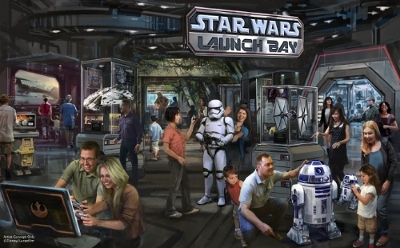 An artist's rendering of one of the new Star Wars attractions Source: Disney.

More park changes are coming
In addition to the Star Wars lands coming to both the Florida and California parks, Disney announced a number of other theme park additions.

Big movie news, too
Though the theme park changes were front and center at D23, the company did make a number of major announcements regarding upcoming movies.