Laredo Petroleum (NYSE:LPI) recently reported less-than-stellar second-quarter results as the company only met expectations while most of its peers exceeded analysts' estimates. That said, the company's management team still seemed pleased with its progress, as it believes it has the right formula to survive any operating environment, which was really the theme on its second-quarter conference call. Here are five things its management team wanted investors to know.

1. Our production growth is accelerating

Despite the low oil price, caused by the fact that there's simply too much oil on the market, Laredo Petroleum is actually accelerating its production growth in 2015. CEO Randy Foutch discussed its revised plan by saying:

We now expect production in 2015 to grow between 16% and 19%, an increase from our previous guidance of 13% to 16%. We are seeing substantial operating and capital cost savings which benefited from our focus on efficiently developing our contiguous, high-quality acreage base.

As a result of cost reductions, Laredo is able to now produce more oil for the same amount of money. While the company could have simply cut its capital expenditures budget and kept its previous growth target, it has instead decided to reinvest the savings into new wells. The reasoning behind the decision boils down to the fact that the company has pretty good liquidity and is earning a solid return, so it makes sense to keep growing.

2. Our financials are strong
Speaking of its financials, Foutch said that the company is currently "well positioned" as it had "more than $900 million of liquidity and a robust hedge position" and that its hedges "generated approximately $110 million in cash flow" so far this year. One thing that differentiates Laredo from many of its peers is that it has much better hedges, providing it with stronger cash flow per barrel as we can see on the following slide: 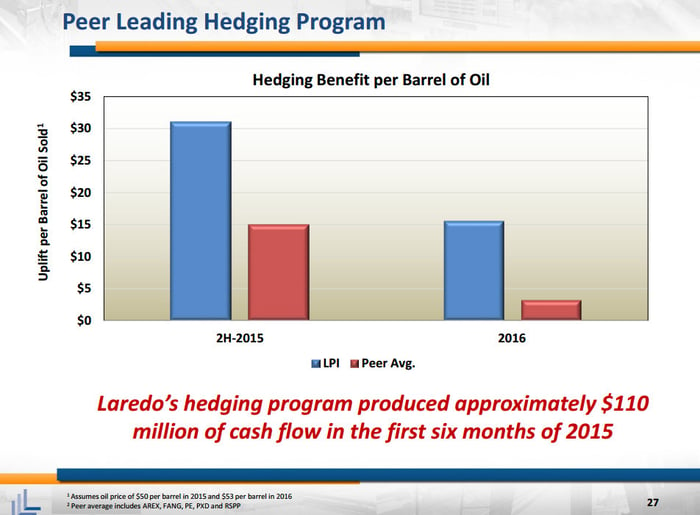 3. Our returns are just as good as they were before oil crashed
As mentioned, the other reason why Laredo Petroleum is pursuing production growth even in the current price environment is because its returns are so strong. In fact, Foutch said that they were "commensurate with those seen in 2014, and enables the company to efficiently increase drilling activity," which is clear from the following slide: 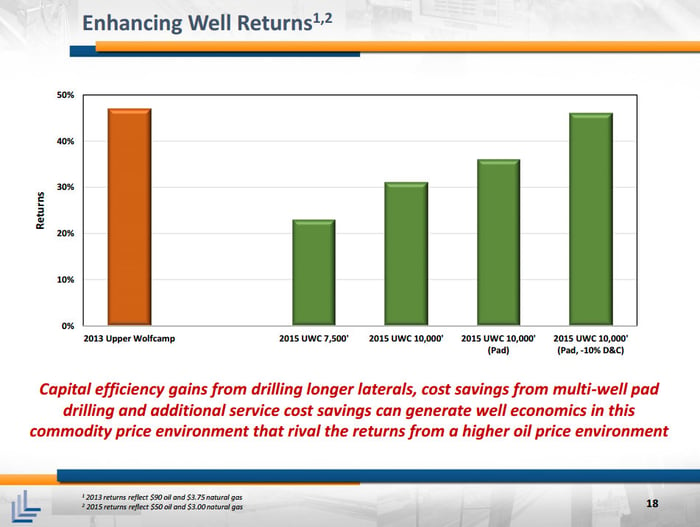 [Our] strong hedge position for both oil and natural gas, coupled with our continued focus on cost controls, resulted in adjusted EBITDA of approximately $118 million for the second quarter of 2015, which was essentially flat with the prior year amount.

Said another way, despite the huge oil price plunge, Laredo's underlying cash flow was flat year over year. It was able to accomplish this through a combination of production growth, cost reductions, and strong oil and gas hedges. In a sense, it is offsetting the tough oil price environment by using the following formula: hedges + cost reductions + production growth = stable cash flow.

5. We're not really interested in M&A
There has been a lot of talk within the industry about merger and acquisition activity picking up as oil prices stay lower for longer. Analysts on the call asked whether Laredo was planning to participate in this activity as either a buyer or seller. Here's what CEO Randy Foutch had to say:

I think our answer to that has been pretty consistent, in that we think we have a tremendous acreage set. We think we have decades of drilling. We think we see huge advantages with our blocked up acreage in our corridor and the infrastructure, and certainly Laredo Midstream Services and the Medallion ownership, all of those catalysts are kind of coming to fruition now. But having said that, we want to do what's right for shareholders. I think across the basin, we're seeing some people make kind of an add-on, very selective acquisitions. I don't know that I have insight into much broader consolidation than that.

In other words, Laredo is very happy with its asset base and its operations as it believes it's poised to deliver strong returns going forward. However, it will do what's right for shareholders, so if it gets blown away with an offer from a rival then it will have to listen. That said, it really doesn't see broad consolidation on the horizon as most companies have plenty of organic-growth drilling opportunities to last them several years.

Investor takeaway
Laredo Petroleum believes it has the right formula to succeed in the current low oil price environment as it has the hedged cash flow and liquidity to keep drilling very economical wells. Beyond the near term, it has decades of economical drilling opportunities on its acreage position, leading it to believe that it can keep growing for years to come even if there isn't a big uptick in oil prices.