Isac Simon
(TMFPetra)
Author Bio
Specializing in oil & gas companies since 2011, Isac digs for attractive investment opportunities among mid-sized and smaller companies in the oil and gas industry. Additionally, he keeps a close watch on economic trends affecting the industry at large. Follow him on Twitter for the latest trends in the U.S. oil and gas space... Follow @isacsimon

During the last 12 months, integrated oil major ExxonMobil Corporation (NYSE: XOM) lost 23% of its market capitalization. Of course, the market hasn't been kind to oil stocks, in general, as crude oil prices slump to new lows almost every other day. But is the sell-off at ExxonMobil actually warranted? Or is it just the perfect opportunity that long-term value investors are looking for in order to jump in and add a few shares of the oil and gas behemoth into their portfolios?

After all, once oil prices stabilize during the next couple of years -- which again depends on various macro factors -- investors would rather be holding on to an undervalued company that has the potential to grow its business despite adverse industry conditions. Let's see whether ExxonMobil fits that bill.

A robust inventory of upstream investments in the pipeline
From the latest quarterly results, it's clear that Exxon has managed to grow its overall upstream business in an impressive fashion. For the first and second quarters of 2015, total worldwide liquids and natural gas production grew 2.3% and 3.6% respectively, over the corresponding year-ago quarters.

In the second-quarter earnings call, management mentioned that between 2012 and 2017, the company would be "committed to our shareholders to bring on 32 high-quality long-life assets." Last year, the first batch of seven projects came online, while this year, another eight projects are expected to contribute to production.

The terrible domestic natural gas market also meant that Exxon had to deliberately cut down on U.S natural gas production. In other words, overall production volumes increased solely due to much higher liquids production. The Irving-based company reported considerable success with worldwide liquids production shooting up 6% and 11.9%, respectively, in the first two quarters of this year over last year's values.

For a super major the size of ExxonMobil, this growth is pretty significant. Translated into absolute values, liquids production in the first half of 2015 grew by an average 186,000 barrels per day, or bpd, to a total 2.3 million bpd. If this trend continues, the company is expected to exit 2015 with a net production growth over the previous year, a feat it hasn't accomplished since 2011.

Management expects that, during the five-year period, these 32 projects will bring a whopping 1.1 million barrels of oil equivalent per day, or boepd, online, more than offsetting the 800,000 boepd expected decline in the same period from existing legacy fields.

Focus on profitability: Controlling costs better than peers
Not only is ExxonMobil's management aiming for absolute growth, it's focusing on increased profitability. While its U.S onshore operations are no doubt successful, with management aiming to double production by 2017, it's also the costlier regions to operate (if not the costliest), relatively speaking, thanks to unconventional drilling. However, Exxon is already driving down costs in its shale drilling program. Management quotes a 30% reduction in well drilling and completion costs from the highs of 2014.

Even a peer-to-peer comparison reveals that ExxonMobil has performed rather smartly in managing costs, as the following chart depicts. 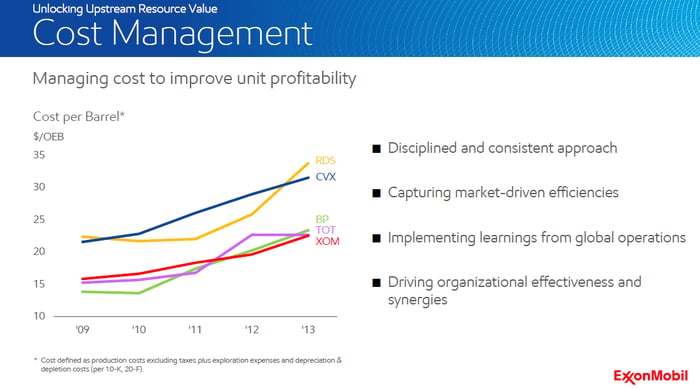 Managing risk better: Strengthening the downstream segment
If ExxonMobil was a stand-alone refiner, it would be the biggest North American refiner. That has immense benefits for the company. Given record crude oil production in the United States and the resulting plunge in prices, Exxon's exposure to cheap feedstock is phenomenal. Averaged over a complete business cycle, the company's returns are much higher than average refining margins for integrated oil companies, thus helping it to generate significant free cash flow. 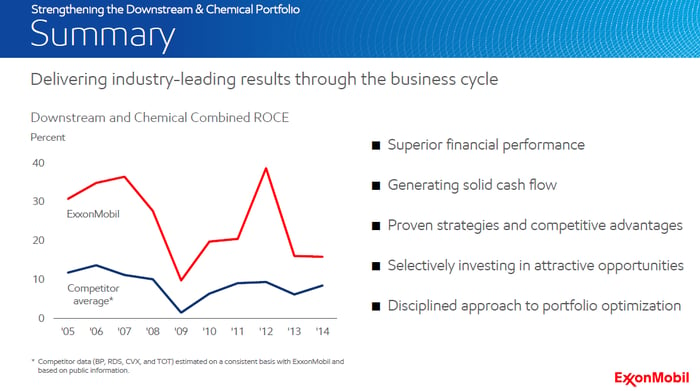 Foolish takeaway: Solid free cash flow generation and reliable dividend
Management believes that ExxonMobil has the ability to grow despite industry downturns. While the integrated model helps it survive during the low oil price environment, both upstream and downstream segments are capable of growing free cash flow meaningfully. That also means Exxon's dividends are safe, and should continue growing as they have in the past.

Currently, the market doesn't seem to care about this, thanks to its obsession with short-term influences such as fluctuations in crude oil prices. While this analysis is, of course, too simple to warrant a buy or sell tag, investors can directionally get an idea where the company is headed.