Advanced Micro Devices (NASDAQ:AMD) has played second fiddle to NVIDIA (NASDAQ:NVDA) in the discrete graphics card market for years. Up until about a year ago, AMD was still putting up respectable numbers; during the second quarter of 2014, the company shipped about 40% of all discrete graphics cards.

Since then, AMD has been bleeding market share. In September of last year, NVIDIA launched some disruptive products, the GTX 970 and GTX 980, beginning a trend of market share losses for AMD that has yet to let up. During the first quarter of 2015, AMD's share of the discrete graphics card market had declined to just 22.5%, according to Jon Peddie Research.

New graphics cards from AMD launched in June, both a series of rebrands as well as brand new high-end products. But according to numbers from Mercury Research, NVIDIA won even more market share from AMD during the second quarter. AMD's market share has now fallen to just 18%. 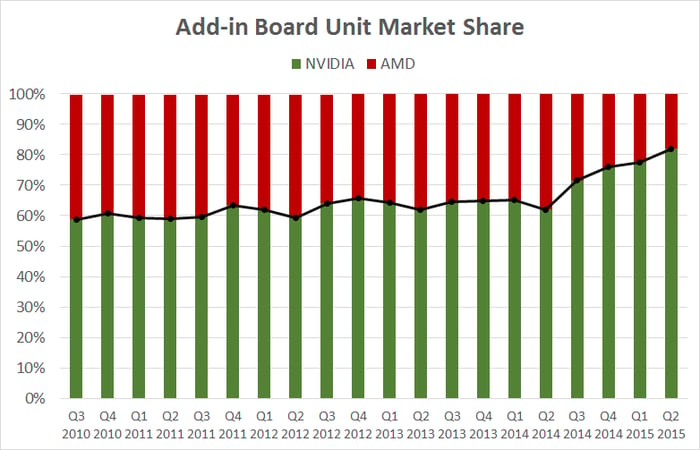 With AMD's discrete graphics card market share cut in half over the past year, and with those share losses accelerating during the second quarter amid an extremely weak PC market, the situation is looking dire for AMD.

Since the launch of the GTX 980 in September of last year, AMD hasn't really had a competitor at the high end of the market. The Radeon Fury and Fury X, which launched at the end of June, corrected this issue, but with availability issues plaguing the high-end cards, NVIDIA still effectively owns the high end. Nearly two months after launch, the Fury X is still completely sold out on Newegg.com. And even if it was available, the GTX 980 Ti, which NVIDIA launched in early June, offers generally better performance for the same price.

Most of the volume happens at lower price points, and AMD has a much stronger lineup in the value segment of the graphics card market. Tom's Hardware routinely publishes a list of the best graphics cards at different price points based on performance-per-dollar, and AMD's GPUs were deemed the best buy at the $100, $115, $150, and $200 price points in the latest update.

Meanwhile, NVIDIA has been filling in its low-end and mid-range lineup with brand-new cards based on its Maxwell architecture. The GTX 960 was launched in January for $199 and the GTX 950 in August for $159. Raw performance isn't the only thing that matters; power consumption, features, and software are also important.

The core problem at AMD is that the company doesn't have the resources to keep up with NVIDIA. AMD's PC business is suffering huge losses, and research and development spending has been slashed over the past few years. NVIDIA has been able to launch brand-new graphics cards; add features like Dynamic Super Resolution, which allows for improved image quality; and develop software like GameWorks, which allows developers to easily add advanced graphics features to their games -- features that are optimized for NVIDIA GPUs. AMD is being out-innovated, plain and simple.

With AMD's high-end cards still in short supply more than halfway through the third quarter, it's hard to imagine the company winning back much market share in the near term. AMD is in a very tough spot, and barring a massive misstep by NVIDIA, I don't see things getting much better for the company anytime soon.