Most commentators typically advise investors not to try to "catch a falling knife." A falling knife is a stock with a rapidly plunging price. The big price cut can make such a stock look appealing to value investors, but the risk is that whatever negative information caused the stock to fall in the first place will continue to hurt the company. 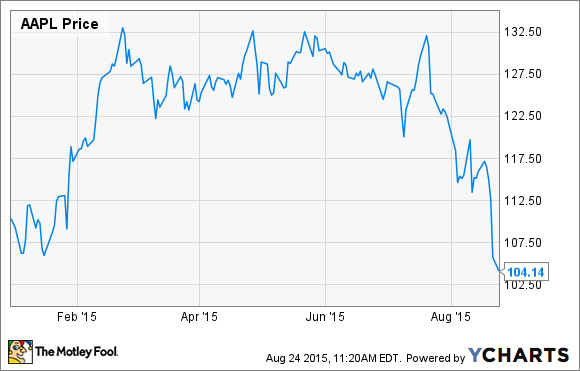 However, Apple doesn't look much like your typical falling knife. Its fundamentals are as strong as ever, it has tons of excess cash, and the stock is now extremely cheap. This might be a falling knife worth buying.

Nothing wrong in China
The difference between Apple and most falling knives is that Apple's position as arguably the most watched stock in the world has created a huge rumor mill that allows speculation (both positive and negative) to feed on itself. In this case, the negative sentiment regarding Apple has become overhyped.

One key concern that has been blown out of proportion is that deteriorating economic conditions in China will bring down Apple's most important growth market. China's recent devaluation of the yuan added to these fears. But if economic weakness in China is a threat to Apple, it hasn't shown through its results whatsoever.

Indeed, last quarter, Apple's revenue in Greater China more than doubled year over year. Some analysts pressed CEO Tim Cook about the company's future prospects in China during its earnings call last month, but Cook maintained that while there might be some speed bumps in the near term, China still had huge long-term growth potential.

More recently, he's gone even further. Cook told TV stock pundit Jim Cramer that iPhone growth in China has remained strong through July and August, and has even accelerated in the past few weeks, according to Carl Quintanilla (via The Street). So much for speed bumps.

Visions of 2012?
A second worry that is prominent among Apple investors is that the recent stock plunge looks a lot like what happened in late 2012 and early 2013, when Apple stock plunged from more than $700 to under $400 in less than a year. Investors who tried to catch that falling knife in late 2012 lost a lot of money in the subsequent months.

That said, the bigger lesson from 2012 might be that patience is a virtue. Even investors who bought near the top made all their money back (and more) in the next two years as Apple stock rebounded.

The iPhone 5 wasn't as profitable as Apple bulls had hoped. Image source: Apple.

Furthermore, there was a lot more genuinely negative news about Apple in late 2012 than there is today. The iPhone 5 wasn't as profitable as analysts had expected. The highly anticipated iPad Mini carried an even lower gross margin, and it mainly cannibalized full-size iPad sales rather than dramatically expand the market.

From a numbers perspective, analysts cut their EPS estimates for the key December quarter of 2012 by 14% between the end of September and mid-January. The key catalysts were weaker-than-expected earnings guidance and apparent order cuts by Apple.

By contrast, analysts' EPS estimates for the current quarter, the current fiscal year, and next fiscal year have all been steadily rising in the past three months. This represents yet another piece of evidence that there is more hype than substance to investors' concerns about Apple.

A falling knife worth buying
If the recent drop in Apple's stock price has been driven by overhyped concerns, then this may be a case where it's a good idea to buy the falling knife. Apple stock never looked expensive -- even at its peak earlier this year -- and it now trades for less than 11 times projected 2016 earnings. (If you deduct Apple's net cash of about $150 billion, the stock looks even cheaper.)

Furthermore, there are plenty of catalysts on the horizon, including new iPhone and iPad rollouts, which typically occur in September and October, respectively. A strong earnings report in October could also help quell investor panic.

Finally, Apple has been steadily buying back stock as part of what is now a $140 billion share repurchase program. If it decides to catch its own falling knife by buying back even more stock this quarter, it will bolster its EPS growth -- contributing to a future share price rebound.