Times are tough in the coal business right now. Coal companies are suffering a series of blows, including tougher regulatory scrutiny of coal-fired power plants, and increasing adoption of natural gas as an industrial input because of rising domestic production and cheap prices. As a result, some companies have been knocked out from these blows. On Aug. 3, Alpha Natural Resources declared Chapter 11 bankruptcy, joining fellow coal miners Walter Energy and Patriot Coal, which already filed for bankruptcy protection earlier this year.

With all this carnage going on in the coal industry, it seems crazy to think there might be a coal company that's actually doing well. But believe it or not, Alliance Resource Partners LP (NASDAQ:ARLP) recently reported a profitable quarter and actually raised its distribution, even though units were already yielding double digits.

Here's a rundown of Alliance Resource's most recent quarter, and how it managed to increase its dividend.

Alliance Resource continues to succeed amid a horrible operating climate in which many other coal companies are failing. Last quarter set a record for revenue, which grew 1% year over year. One reason is that the company continues to increase production. Coal sales volumes hit a record last quarter, and inventories were reduced by 962,000 tons, which exceeded management's expectations. Over the first half of the year, distributable cash flow is up 3% versus the same period in 2014.

Another benefit to Alliance Resource is that it has avoided the worst-performing coal regions and products in the United States. Alliance Resource focuses on thermal coal, which is used for power generation, and not metallurgical coal, which is used in steel production. Metallurgical coal demand has dried up significantly because of weakening exports to emerging markets such as China. Thermal coal has suffered, too, but not to the same extent.

The EBITDA margin per ton stood at $20.27 last quarter, which compares very well to $15.91 per ton at Alliance Resource's Appalachia operations.

Distributions keep on rising
Compared with its distressed peers, Alliance Resource isn't burdened by high debt levels. Its total debt-to-EBITDA ratio stands at 1.1, which means the company's liquidity position is healthy. Its balance-sheet strength and sound operations allow the company to keep increasing its distributions. 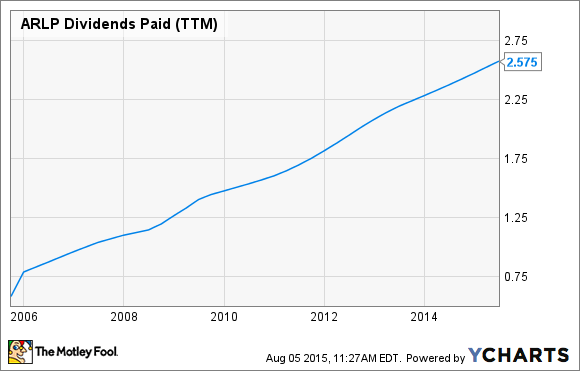 Importantly, its distribution is covered by underlying cash flow. As of last quarter, the company's distribution carries a 1.71 distribution coverage ratio, which means the distribution should be secure, provided the coal industry doesn't fall apart completely. The U.S. Energy Information Administration reported that coal accounts for 30% of U.S. electricity generation, which is down from previous levels, as some coal has been replaced by natural gas. But that's still a great deal of coal, and it's enough for a best-in-breed company like Alliance Resource to succeed. Consider that 96% of Alliance Resource's 2015 contracts and 65% of its 2016 contracts are already priced and committed.

The bottom line is that while the coal industry more broadly is struggling, Alliance Resource's operating advantages allow it to continue thriving. Its 11% distribution yield is icing on the cake.

Believe It or Not, This Coal Company Just Raised Its Dividend @themotleyfool #stocks $ARLP Next Article
Current