Shares of Corning Incorporated (NYSE:GLW) are down roughly 13% since the high-tech glass specialist released mixed second-quarter results last month. But that's not to say Corning's performance was all bad. While quarterly revenue climbed only slightly year over year to $2.52 billion, falling just short of expectations for $2.54 billion, Corning's core earnings per share climbed 12% to $0.38, beating estimates by a penny.

It doesn't help that the broader market fell particularly hard in recent weeks, effectively pulling down shares of the glass maker with it: 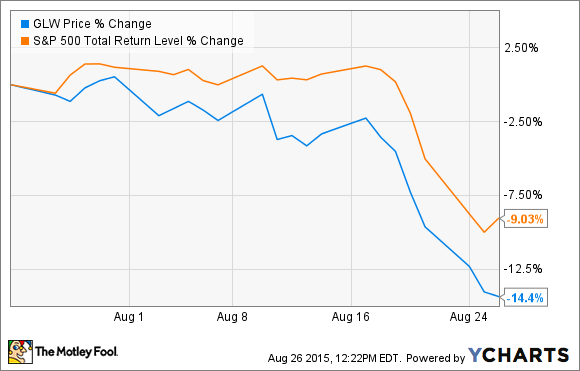 Given this volatility, however, now's a perfect time for Corning investors to revisit the driving forces behind their business. To do that, let's examine five important points Corning management discussed during their most recent earnings conference call:

1. Gorilla Glass is firing on all cylinders

First, Gorilla Glass 4 is now designed into 43 models as OEMs embrace its superior drop performance. Its penetration is the fastest yet of any of our new Gorilla Glass introductions. And even better, it has a price premium. Second, our sales of Gorilla Glass in China are up 45% year-to-date. And third, we just announced our first smart phone customer using Gorilla Antimicrobial Glass. -- Corning CFO Jim Flaws

Corning only officially launched Gorilla Glass 4 this past November. So on one hand -- and keeping in mind Gorilla Glass 4 commands higher margins given its higher price point -- it's incredibly impressive the rugged new cover glass has already found its way into more mobile devices than any previous Gorilla Glass iteration at this point in its release cycle. On the other hand, Corning Gorilla Antimicrobial Glass has had a slower start since it was unveiled in January 2014, only to finally secure its first design win last month with a spot in China-based ZTE's AXON flagship smartphone. But even then, it's no surprise that first win came in China, where a growing middle class and increasing demand for higher-end smartphones is causing Gorilla Glass sales to skyrocket.

2. Strength in Optical Communications was no fluke

In our Optical Communications business, we've been strategically positioning ourselves over the last several years by focusing on product innovations and acquisitions to capture growing demand in optical networks. And we are winning. Customers are increasingly turning to our innovative solutions to solve their speed, capacity and cost challenges. -- Jim Flaws

For perspective, Corning's Optical Communications segment led all others in terms of growth in Q2, with revenue up 17% year over year to $800 million. For that, Corning credited strength in hyperscale data centers, as well as its acquisitions of TR Manufacturing in January and Samsung's Fiber Optics business in March. To be fair, Flaws elaborated while overall capital expenditures in the telecom market have grown by just 2% over the past year, optical CapEx within that period simultaneously grew by 5%. And thanks to Corning's strategic positioning in recent years, its own optical solutions growth has more than doubled even that solid clip.

3. With LCD glass, less is more

As a reminder, we are in the midst of a significant move from thick to thin glass. Because we've incented customers with price to make the switch, it makes our overall price declines look larger. As a reminder, we did this incenting because our margin dollars on thin remain neutral to thick, and we gain free capacity. -- Jim Flaws

It's no mystery Corning's core Display Technologies segment has suffered through an extended period of LCD glass price declines. And while those declines have continually moderated, it's important to know some of the negative pricing effect here is due to Corning's conscious decision to compel customers with thinner, cheaper versions of its LCD glass. This not only helps Corning's customers reduce the prices and thickness of their own LCD televisions, but also increases Corning's margins and frees up manufacturing capacity.

4. Corning continues to increase investors' slice of the pie

During the quarter, we increased the rate of our share repurchases by about 25% compared to Q1. We spent $626 million on share repurchases in the quarter. This increase reflects our view that with the company's current performance and future prospects, our stock is undervalued. We expect the company's cash generation to remain strong and we want to put the cash to work for shareholders. -- Jim Flaws

In fact, not only did Corning accelerate its share repurchases in the second quarter, but it also authorized a new $2 billion share repurchase program just prior to its quarterly report. That program expires at the end of 2016. With $5.5 billion in cash on its balance sheet, and $380 million in free cash flow generated last quarter alone, Corning certainly has the funds to do so.

But investors should also keep in mind "only" $2 billion of Corning's cash is currently in the United States. Combined with the obligations of its dividend, which at today's share price yields around 2.9% annually, Corning might need to temporarily take on some low-cost debt if it wants to fully utilize its repurchase authorization in the near-term -- that is, at least, without incurring an unnecessary tax bill by bringing foreign cash stateside.

We've got our first order on Phire. But [...] the first ones are going to start a little smaller, so it's going to be on wearables. More to come. This is a brand-new process as well as a brand-new product, so its ramp cycle's going to be a little slower. What we like about it is it offers the opportunity to significantly increase our revenue and profit per device sold, as well as having scratch performance approaching sapphire, but also the outstanding drop performance of Gorilla where sapphire has that weakness of not as good a drop performance. -- Corning CEO Wendell Weeks

Finally, you might recall at Corning's 2015 annual meeting in February, the company unveiled "Project Phire." Under Project Phire, Corning promised by the end of this year it would commercialize a new cover glass with the same damage resistance and drop resistance of Gorilla Glass 4, but also with the same extraordinary scratch resistance as sapphire. Corning hasn't officially confirmed commercialization of Phire just yet, but investors should be particularly encouraged that -- similar to the early success of Gorilla Glass 4 -- Phire has already secured its first design win. Given Weeks' mention of that design being a "wearable" device, I can't help but wonder if Corning has fulfilled my prediction of winning an expanded slot protecting a certain smart watch created by the folks in Cupertino.

Regardless of whether that turns out to be the case, however, one thing is clear based on the five points above: Corning is a solidly profitable business intent on rewarding shareholders for their patience. With multiple catalysts in the pipeline from its burgeoning Gorilla Glass products to Optical Communications, moderating LCD glass price declines, ongoing dividends and share repurchases, and the promise of emerging products like Phire down the road, I think Corning investors have every reason to be excited for the future.