Fifth Street Finance (NASDAQ: FSC) has taken its fair share of lumps, but if there's one redeeming quality, it's that the dividend is probably safe for quite some time. The reason is simple: The fee structure that limits your upside also limits the downside.

The structure is hardly unique -- it's something you'll find with most pre-crisis BDCs -- but the situation is; if Fifth Street Finance's recurring earnings fall, its manager, not its shareholders, will pay for most of the decline.

Putting numbers to words
I often describe BDC's fee structures as being "two and 20"-style fee agreements, where the manager takes 2% on assets plus 20% of returns each year. While true, that's a little simplified, particularly the 20% part of the equation.

A graph can do a better job explaining this than I can: 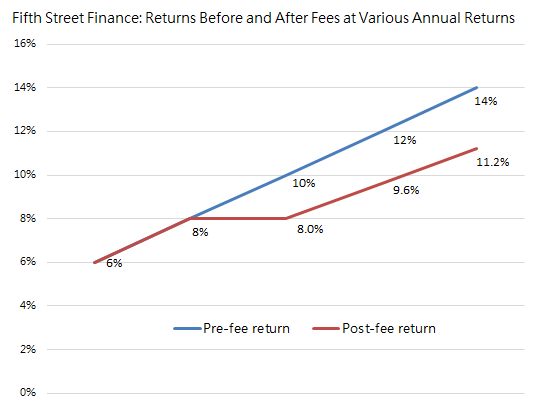 Up to an 8% annual return, there's no difference between pre- and post-fee results because the manager doesn't receive a fee for earning less than 8% annually. The interesting part happens between 8% and 10%. Here, the manager receives all of the incremental income as part of the fee agreement. Whether the pre-fee results are 8% or 10%, it doesn't matter -- the shareholders only get 8%.

Finally, beyond 10%, the manager and the investors split the gains 80%-20%, with the bulk going to the investor.

Why it all matters
Last quarter, Fifth Street Finance earned a pre-fee return on equity of about 2.3% for the quarter. Thus, the result was that shareholders only received two percentage points of that return, with the remainder flowing to the asset manager. That's how the fee structure works.

There are two consequences of the current situation:

First, the incremental risks that Fifth Street Finance is taking to generate higher returns really only benefit the manager. There's no difference between earning 2.3% in a quarter or 2% in a quarter from the shareholder's perspective. It's unfortunate, but it's in the management team's best interest to take bigger risks with your money because all of the additional yield -- up to a 2.5% return on equity -- goes right into their pockets.

Second, Fifth Street Finance's income could drop significantly with no impact on results for shareholders. The difference would come out of the manager's payday.

Last quarter, Fifth Street Finance generated about $70 million at the top line. I calculate that its revenue could have been as low as $58 million before shareholders felt any impact at all. In other words, revenue could decline by about 17%.

This is nice to know if you're a shareholder because one of the most variable line-items in its income statement -- fees it earns when it makes a new investment -- made up just about 12% of revenue last quarter. That could go to zero, and everything will be just fine from the perspective of getting your dividend.

If there's one redeeming quality about Fifth Street, it's that it can afford to pay your dividend, even if it derisks the portfolio, reduces leverage, or if its investment yields decline pretty substantially. The only thing it can't tolerate, particularly now, are credit losses. Those, unfortunately, come right out of your pocket.