Matthew DiLallo, Tyler Crowe, and Adam Galas
(TMFmd19)
Author Bio
Matthew is a senior energy and materials specialist with The Motley Fool. He graduated from Liberty University with a degree in Biblical Studies and a Masters of Business Administration. You can follow him on Twitter for the latest news and analysis of the energy and materials industries: Follow @matthewdilallo

Peter Lynch was known for his fondness for relatively unknown companies that have solid growth prospects. Here are three energy stocks fitting that profile that we think would make him proud.

Adam Galas: In my opinion, one of the best little-known small-cap energy investments right now is Calumet Specialty Products Partners (NASDAQ:CLMT), a specialty refiner that is very good at growing through successful acquisitions as well as major organic growth projects.

For example, over the past decade, through lots of purchases in the highly fragmented refining industry, Calumet has managed to grow sales at 18.2% CAGR, with international sales recently growing at over 50% per year. Today it sells 5,000 specialty refined products in addition to traditional fuels, and its newly acquired oil services business provides fluids needed for drilling and fracking.

Calumet is also just six months away from completing a multiyear $665 million organic growth campaign involving four major projects that are expected to grow EBITDA by around 66%, while achieving an average rate of return of 24%.

These projects will also greatly increase distributable cash flow, and most important for dividend investors like myself, not only help secure the current distribution -- a very nice 11.1% protected by a trailing-12-month distribution coverage ratio of 1.3 -- but probably also allow for some nice payout growth in the future.

With the stock's insider ownership of 24% but only 22% institutional ownership, I feel confident that management and I are on the same team, but most of Wall Street hasn't discovered Calumet... yet. I think long-term income investors will profit handsomely when it grows big enough to get attention.

Tyler Crowe: For some investors, buying into a liquefied natural gas shipping company may not follow Peter Lynch's "Buy what you know" mantra. If you are looking for an energy company that has strong prospects for the future and one that isn't really on Wall Street's radar, then GasLog Partners (NYSE: GLOP) is a company worth looking into.

Ask just about any major oil and gas producer out there and they will tell you that the opportunity to export and import natural gas through LNG is a major one that is expected to grow substantially over the next decade. 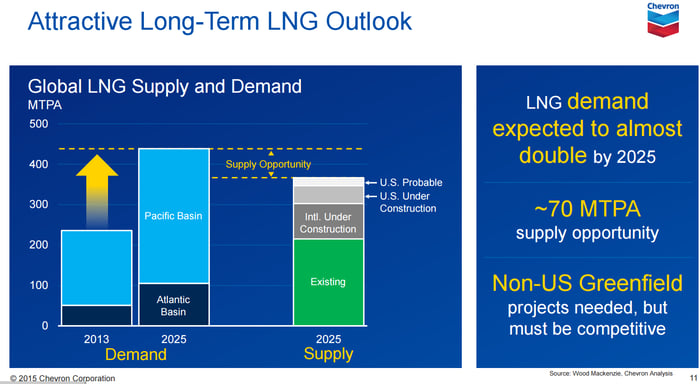 This means that not only will shipping of LNG be in high demand, but it will also require companies to grow their fleets to meet that demand. Today, GasLog Partners has only five ships, but the advantage of those ships is that they are under charter contracts for several years that have potential extensions all the way to 2026. 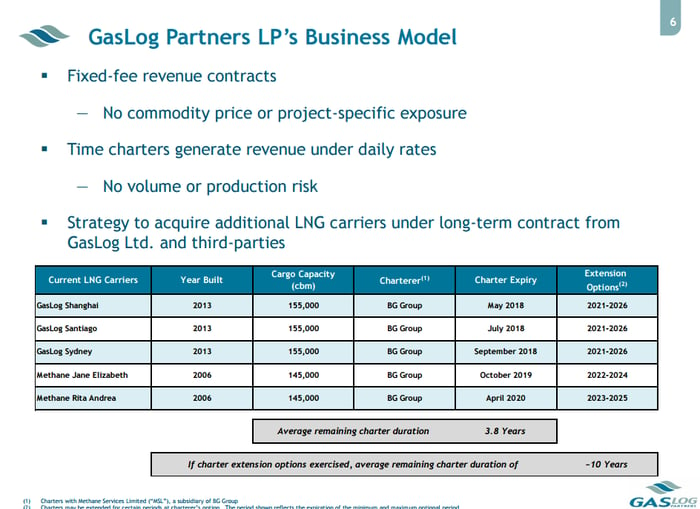 Meeting that Peter Lynch requirement, GasLog Partners expects to have more than 12 ships added to its fleet as its parent company, GasLog, drops them down once they are constructed and chartered for the long term. What is also encouraging about these charters is that they are all out to BG Group, which will be part of Royal Dutch Shell soon. Having its ships contracted out to a company like Shell means that there is very little risk of the company defaulting on its payments.

Right now, GasLog Partners is only 35% owned by financial institutions, so it's not really on Wall Street's radar. However, with such an immense opportunity to grow its fleet, a strong contract portfolio with little counterparty risk, and a 10% distribution yield, the chances of it staying out of Wall Street's sights for long aren't great. If you are looking for some exposure to one of the fastest-growing components of the oil and gas business, GasLog Partners is probably a good start.

Matt DiLallo: Sticking with the relatively underfollowed theme, I bring you Buckeye Partners (NYSE:BPL). It is a company that traces its roots back to the old Standard Oil Company, when its predecessor, The Buckeye Pipe Line Company, was founded as a subsidiary of Standard in 1886. It became independent in 1911 when Standard Oil was broken up, and subsequently reorganized into an MLP in 1986.

Today's Buckeye is a petroleum products pipeline and storage company that's focused on four hubs: Chicago, the New York harbor, the Gulf Coast, and the Caribbean. The company's assets are primarily fee-based, which has provided it with very stable income during the oil market downturn.

While MLPs in general have been a hot commodity over the past few years, Buckeye has managed to fly under the radar. While it's a bit more institutionally owned at 66%, the company still isn't on on most investors' radar. That's largely due to the the fact that it doesn't have the large, flashy organic growth backlog of some of its larger peers. Instead, Buckeye simply continues to build its network via smart strategic acquisitions and expansion projects. As the following chart shows, this is yielding growing cash flow and cash distributions, while at the same time an improved balance sheet. 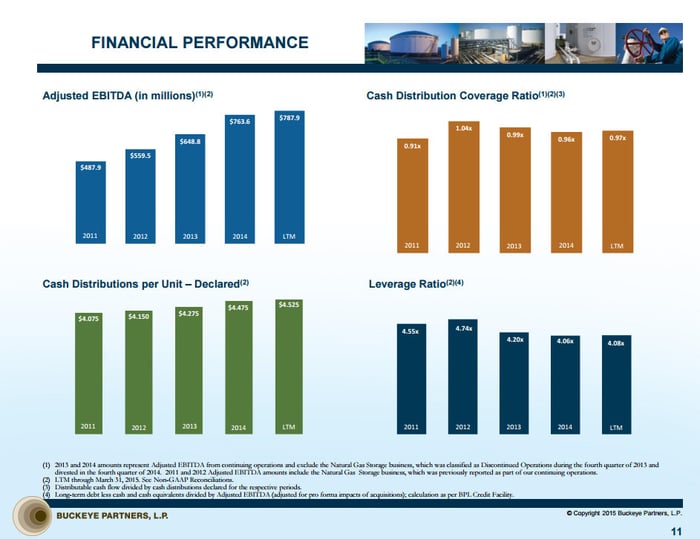 What is important to note about that growth is that it is being increasingly driven by the company's global marine terminals business, which has grown from nothing to 33% of adjusted EBITDA over just the past five years. It's a business that has plenty of growth potential in the years ahead as the U.S. increases its petroleum-product exports thanks to the shale revolution. It's a story that Wall Street has yet to discover, giving early investors a leg up on this underfollowed MLP.