All of Chipotle's (NYSE:CMG) restaurants will open early in the morning on Sept. 9. But if you show up at 8 a.m. hoping for an egg burrito, you'll be disappointed. Chipotle isn't launching a breakfast menu. It's holding a hiring event before starting its regular lunch service.

Management wants to find 4,000 new crew members to boost its employee ranks by 7%, according to The Wall Street Journal [subscription required], and this could just be the start of a yearly hiring surge. Chipotle bills the day as its first ever "National Career" event.

Store growth
Many of the new hires will go toward staffing Chipotle's fast-growing store base. There were 97 new locations added in just the past six months, and the company is on track to open 205 shops by the end of the year. Chipotle had less than 500 locations when it went public in 2006 and now operates more than 1,850 restaurants and employs more than 60,000 people. 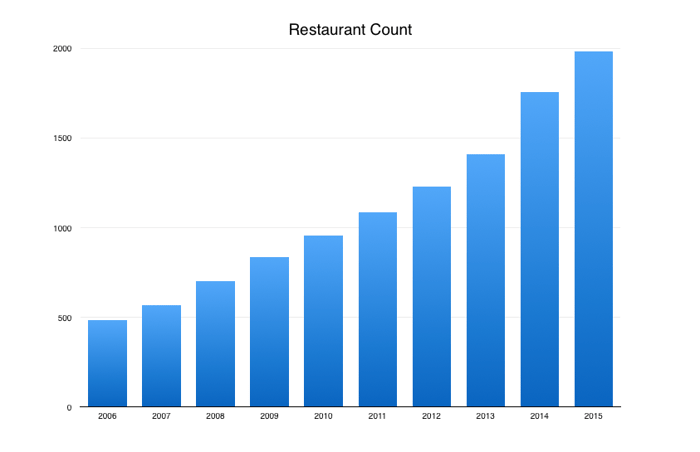 Number of restaurants at the end of each fiscal year. 2015 is projected. Source: Chipotle filings.

Since an average store needs 24 hourly crew members, Chipotle's current expansion pace puts its appetite for new employees at almost 5,000 per year -- and that's before counting turnover at existing shops.

Hiring differently
In addition to ingredient sourcing and preparation methods, hiring is another thing that Chipotle does differently than rival fast-food companies. The chain does not franchise a single one of its locations, which gives it complete control over who works in the kitchen and who stands behind the burrito line. Compare that with McDonald's, and its 80% franchised model, or Burger King's 0% corporate ownership rate.

Chipotle uses that control to ensure that it hires consistently around 13 traits that it believes suggest a new crew member will succeed with the company. These include being polite, honest, motivated, and happy. Assembling teams of such employees is critical to the business performance, executives say. "Our special people culture leads to a better dining experience for our customers, better-tasting food, faster throughput, the development of extraordinary future leaders, better business results, and ultimately the creation of significant shareholder value," Chief Financial Officer John Hartung told investors in last quarter's conference call.

Increased costs
Labor costs were on the rise before this latest hiring bounce, and they should keep climbing. The pay rate for hourly managers jumped by 4% last quarter, which was the highest increase in years. Those raises contributed to labor expenses jumping by almost a full percentage point to reach 23% of sales. "Because we desire to attract and reward only top performers, it's very important for us to stay ahead of the curve and pay attractive starting wages," Hartung explained. The company says the new labor costs should run at an annual pace of $10 million per year beginning in the third quarter.

There's no question that the operations benefit from better employees. That success shows up in higher guest satisfaction scores and more word-of-mouth marketing. But it also has an immediate sales effect: Chipotle's highest-performing teams can handle 300 customer transactions an hour during peak lunchtime traffic, which is a big reason why the company could book comparable-store sales gains this quarter after a double-digit jump in the prior-year period.

Chipotle won't be struggling to afford the extra labor investments. Despite the rising costs, restaurant profitability is up a full percentage point through the first six months of the year to 28% of sales. It can afford to hire thousands of new crew members, at increasing hourly rates, without sacrificing profitability. So why not do it all in one day?