What: August was an abysmal month for C&J Energy Services, Ltd. (NYSE: CJES) investors as the stock crashed nearly 40% last month. Fueling the fallout was a trifecta of bad news as earnings, analysts, and oil all contributed to the drop.

So what: C&J Energy Service started the month on the wrong foot as it reported less-than-stellar second-quarter results on Aug. 5. While the company beat the consensus earnings estimate by $0.10 per share that was of little comfort as it still lost $0.46 per share. Meanwhile, revenue only came in at $511.2 million, which was nearly $50 million less than analysts were expecting. On top of that, its outlook wasn't very encouraging as it said that market remains "difficult" and the duration remains "uncertain." As the chart below shows, this started the company's downward slide. 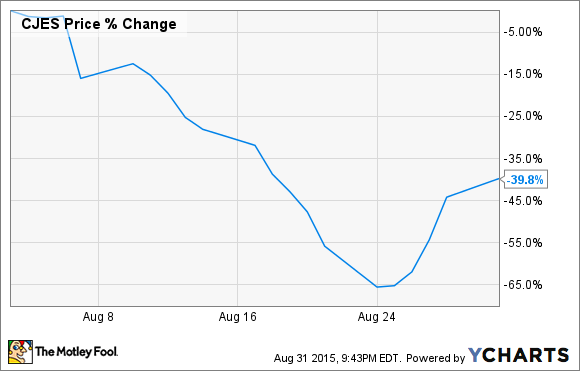 Making matters worse was that the price of oil continued to slide as the month wore on as crude was down double digits at one point sparking worries that oil and gas activity levels won't improve any time soon. It was this concern that led SunTrust to downgrade the stock from Buy to Neutral while also cutting its price target cut from $11 to $4. That downgrade, which hit the market on Aug. 24, really sent shares into a free fall. However, it is worth noting that the downgrade seemed to be at the very bottom as the stock surged at the end of the month largely due to the fact that the price of oil rebounded sharply and actually ended the month higher.

Now what: C&J Energy Services stock will likely to continue to be volatile until the energy market settles down. That could take a while as activity levels are still in the process of finding a bottom. Right now industry needs a higher oil price before producers will increase investments to grow production. This increase is what is needed to push activity levels higher and thereby improve C&J Energy Services' business prospects.