Please ensure Javascript is enabled for purposes of website accessibility
Log In Help Join The Motley Fool
Free Article Join Over 1 Million Premium Members And Get More In-Depth Stock Guidance and Research
By Matthew DiLallo - Sep 2, 2015 at 10:02AM

After spending five years refocusing its portfolio, Apache Corporation is ready for whatever the future holds.

Few companies have undergone as dramatic a portfolio turnover as Apache Corporation (APA -1.20%) has over the past five years. The overall intent of the reshuffle was to improve the company's flexibility and reduce risk. However, it was a transition that had impeccable timing as it put the company in a much better position to weather the current downturn in oil prices.

A dramatic shift
As the following slide shows, Apache basically swapped $17 billion in assets over the past five years. 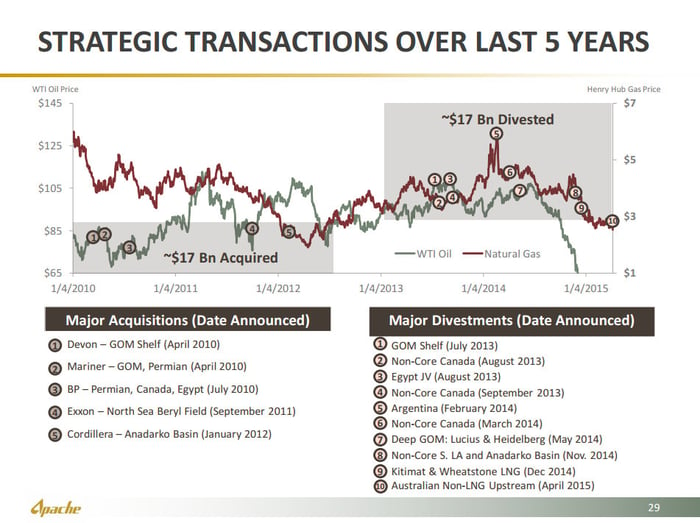 This reshuffling has resulted some dramatic changes to the company's portfolio, two of which are detailed on this next slide. 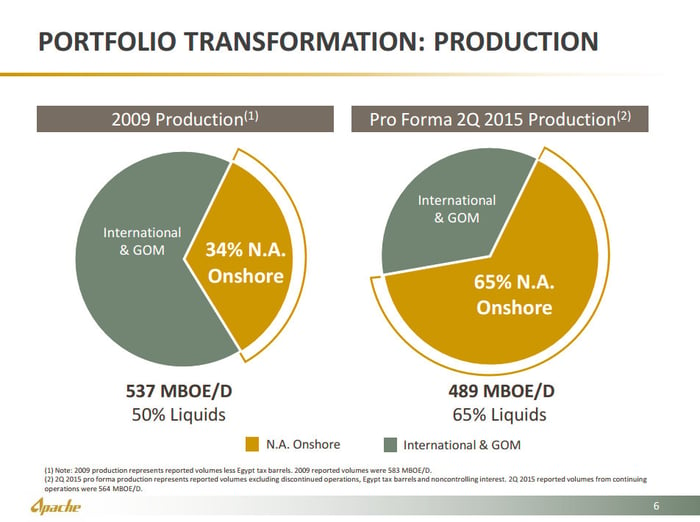 As the chart notes, the first shift has resulted in the company becoming much more North American onshore focused as its production from that region has gone from just over a third to nearly two-thirds. The other major shift is in its production mix, which moved up from 50% liquids to 65%.

This is important for a few reasons. First, by increasing its production from North American onshore assets, Apache has removed a lot of risk from its portfolio. Not only has it reduced its exposure to politically risky areas like Argentina and Egypt, but it has also lessened project execution risk by moving away from offshore and LNG projects, both of which had seen costs skyrocket. The other thing the shift has accomplished is improve Apache's margins as it is now producing greater volumes of higher margin liquids, which helps to reduce some of the sting from falling commodity prices.

Dramatic improvement in flexibility
Something else that the shift has accomplished is that it makes Apache a much more flexible company. Offshore and LNG projects are capital intensive and can take several years to build, which is a risk because the commodity price when the project is sanctioned can be much lower by the time it is actually producing. A perfect example of this can be seen by looking closer at the company's recently sold interests in the Lucius and Heidelberg Gulf of Mexico projects, which were offloaded to Freeport-McMoRan (FCX -2.27%) last year before oil collapsed. The Lucius project was first sanctioned in 2011 when lead operator Anadarko Petroleum (APC) and its partners decided to move forward with its development. However, that project didn't deliver first oil until this past January. In the meantime, oil did this: 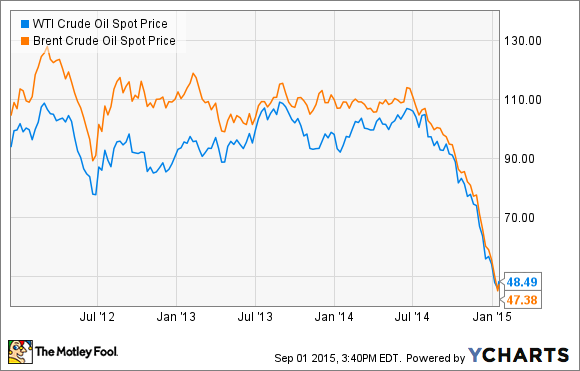 In other words the project came online right after oil prices plunged, which has to be frustrating as prices stayed relatively high all through construction. It was a steep drop that really caught new owner Freeport-McMoRan off guard as its cash flow is now much less than it was anticipating. This forced the company to scramble for other options to fund its other Gulf of Mexico developments, including its portion of Heidelberg, which Anadarko still expects to come online next year.

On the other hand, much of Apache's North American onshore growth is coming from horizontal shale wells that can be drilled and turned into production in a matter of months. Because of that speed, the investment to drill more wells can be increased or decreased quickly when commodity prices move. It was that flexibly that enabled Apache to cut its 2015 capex budget by 60% over last year's amount, helping the company maintain a solid balance sheet and liquidity position during the downturn. That degree of flexibility isn't found at Anadarko and Freeport-McMoRan as both are locked in to funding longer-term projects.

Because Apache has so much more flexibility now, it is establishing medium- and long-term development goals based on three different oil and gas price scenarios. Under really weak prices, it can simply live within its cash flow and maintain stable production. If prices improve, it can ramp up its growth and fully capture the upside to higher prices.

Investor takeaway
Apache has really revamped its portfolio over the past few years. The end result is a portfolio that has a lot less risk and is much more flexible as the company can ramp down its investments during the downturn while quickly ramping up in a recovery. That's not as easy for Anadarko and Freeport-McMoRan to do as they have a number of larger multiyear projects that must be funded whether oil is high or low.