United Continental is finally joining the other three top U.S. airlines in the prestigious S&P 500 index.

Last week, S&P Dow Jones Indices -- the organization that manages the widely followed S&P 500 index -- announced that global airline United Continental (UAL 2.57%) will join the S&P 500 after the market closes on Wednesday, September 2. The stock jumped 7% on the day following this announcement. 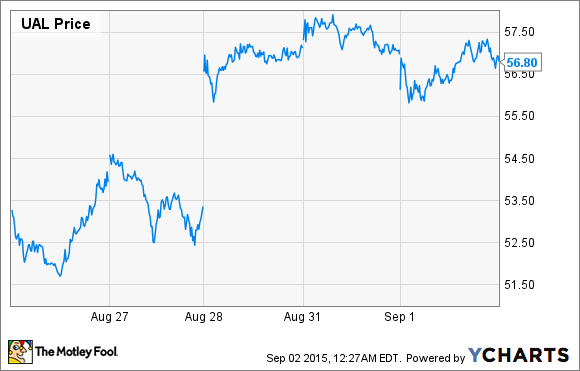 The other three major U.S. airlines are already members of the S&P 500. United's inclusion in the index represents a validation of the company's turnaround progress, as it is catching up to its peers in terms of profitability.

United turns things around
Just a couple of years ago, United Continental badly lagged its peers in the airline industry in terms of profitability. Quarter after quarter, the company's management team trotted out one excuse or another for United's poor performance, without admitting that there was a bigger problem.

Since then, however, United's management has made a series of smart moves to hold down its cost structure, rein in capital expenditures, and concentrate capacity in its top markets. First, it decided last year to shut down its small hub in Cleveland, which had been persistently losing money.

Second, United is drastically reducing the number of 50-seat (and smaller) jets and turboprops in its regional fleet. These aircraft are very costly to fly on a per-seat basis, are less comfortable than larger planes, and lack amenities necessary to woo well-heeled fliers.

United removed 45 of these planes from its fleet in 2014 and plans to remove another 80 in 2015. It is replacing this capacity with a combination of larger 76-seat regional jets and mainline aircraft.

United is removing lots of 50-seat jets from its regional fleet. Photo: The Motley Fool

A third example of United's fresh thinking was a recent decision to stop flying to New York's JFK Airport. Instead of continuing to lose money at an airport where it has very few flights, United is moving all of its transcontinental flights to Newark Airport, where it is the dominant carrier. It may sacrifice some market share, but it should be more profitable.

Finally, United is becoming more prudent about capital spending. Following the example of Delta Air Lines, it has snapped up some used aircraft at attractive prices. It also recently swapped 10 orders for Boeing's popular Dreamliner for the larger 777-300ER, which will allow it to add capacity on high-demand routes without spending more money on new planes.

Financial performance improving
United Continental still has a ways to go to match the profitability of its peers -- which some of its ongoing initiatives are designed to address -- but it is clearly making progress.

In Q1 2014, United posted an ugly $489 million loss (excluding special items). By contrast, it earned more than $500 million in Q1 2015. United's profitability has continued to rise steadily this year, despite the negative impact of its heavy exposure to the softening Chinese economy. Last quarter, it earned the highest quarterly profit in company history: $1.3 billion excluding special items.

The financial benefits from United's ongoing fleet restructuring will continue to grow in the next few years. The end of service at JFK Airport next month and the concurrent move of United's transcontinental premium service to Newark Airport should also contribute to improved profitability. United has been pursuing other cost-cutting moves, too.

There are still some structural impediments that could prevent United from matching the industry leaders in terms of profitability -- at least for the next few years -- but the gap is closing. After several years of pain, United has finally become highly profitable and is generating significant free cash flow, which it is using to pay down debt and buy back stock. The company's place in the S&P 500 index is thus well-deserved.

Adam Levine-Weinberg owns shares of The Boeing Company and United Continental Holdings, and is long January 2017 $40 calls on Delta Air Lines, The Motley Fool has no position in any of the stocks mentioned. We Fools may not all hold the same opinions, but we all believe that considering a diverse range of insights makes us better investors. The Motley Fool has a disclosure policy.