It's possible to make big money investing in companies with known problems, so long as there are good reasons to believe the future will be brighter. It's risky, yes, but it can also yield huge rewards if the company successfully turns around.

That's the bet several prominent hedge funds are making with their recent investments in a little-known bank stock: Bancorp (NASDAQ:TBBK).

Bancorp
Most banks operate branches, market to local businesses and individuals, and face the public directly. Not Bancorp. This bank operates as a private-label banking solution. In other words, it allows nonbank companies to do bank-like things.

Companies can offer their customers deposit accounts, loans, and other bank products using their own brand names, while Bancorp is the actual financial institution doing the work on the back end.

As of Dec. 31, 2014, Bancorp reported total assets of $5 billion. Why I am reporting the number from last year's fourth quarter and not the recently completed second quarter? We'll dive into that issue in just a minute. But first, let's talk about the hedge funds investing in this bank.

Who's buying?
As of June 30, Second Curve Capital reported a 2.4 million share position, which is a 5% increase from the first quarter and about 8% of the fund's total portfolio of stocks. Over the past 18 months, Second Curve has owned as many as 2.8 million shares, but overall the position has been pretty stable. Second Curve is a well-known fund that specializes in the financial sector. The fund, managed by Tom Brown, manages just over $280 million in public stocks.

Consector Capital, another financial-industry specialist run by fund manager William Black, reported a smaller position of 700,000 shares, down 48% from its ownership in the first quarter. Consector owned 1.3 million shares as of Dec. 31, 2014, the high-water mark in a position it's been building since 2013. That said, Bancorp's share of the portfolio only dropped from 6.4% to 5%.

A few other notable funds are invested in Bancorp as well, Endicott Management, which has a $275 million stake.

The trouble facing Bancorp
Now, with the hedge funds accounted for, there's an issue with Bancorp that we need to address. The company hasn't actually filed its 2014 annual report, its first-quarter 10-Q, or its second-quarter 10-Q. The NASDAQ has gone so far as to send a letter to the company stating that if these reports are not filed by Sept. 8, then the stock will be delisted. Not good.

All this trouble stems from a series of accounting errors discovered by the audit committee of the board of directors late last year. Those errors caused the bank to allocate certain loan-loss reserves to the wrong quarters, making some quarters look too profitable and others not profitable enough. The board claims the errors are a zero sum in the end, but that doesn't change the fact that the bank will be forced to refile financial statements. That's always a red flag -- and a serious one at that.

So what's taking Bancorp so long to get all this sorted out? Apparently, the company has been forced to review a massive number of loan files -- over 2,500 of them, going back years.

The stock has been absolutely hammered in the interim, as one might expect. 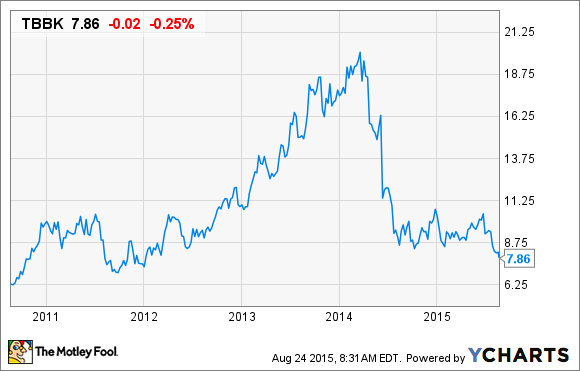 Over the past few years, the bank has underperformed the industry with its 0.50% return on assets and its 6%-7% return on tangible common equity. However, over that same time period, the bank traded at double its current valuation in terms of price to tangible book value. The decline in its valuation coincided perfectly with the current accounting problems, implying the bank could be worth quite a bit more if those issues can be resolved.

For the hedge funds, the risk in this accounting fiasco is justified by the potential reward. The board has said that the fundamentals of the business are not affected. If that's to be believed, then the investment thesis makes a lot of sense.

Of course, given the lack of financial filings since last year and the fact that those filings are not accurate, we have no way to know how the business is actually doing. It's a gamble no matter how you slice it, but it's one these hedge funds are willing to make.