Please ensure Javascript is enabled for purposes of website accessibility
Log In Help Join The Motley Fool
Free Article Join Over 1 Million Premium Members And Get More In-Depth Stock Guidance and Research
By Ashraf Eassa - Sep 6, 2015 at 9:00AM

Intel is reportedly trying to bring its PC-oriented Skylake architecture to the smartphone market.

Intel (INTC -0.86%) has been working to bring down the power consumption and physical footprints of its Core processors for quite some time. This has largely been in service to the company's plans to enable thinner and lighter notebook PCs as well as to try to get its higher-end (and higher-margin) Core silicon into 2-in-1 convertibles and tablet-like devices.

What's interesting, though, is that Intel is reportedly (via Gizmodo) trying to squeeze chips based on its latest Skylake architecture into large smartphones or "phablets."

I don't think that many -- if any -- phone vendors will actually wind up deploying smartphones based on the company's Skylake architecture, but the notion of Intel putting its Core micro-architecture into a smartphone is one worth exploring.

Skylake comes pretty close, but not quite there
A typical high-end smartphone system-on-a-chip is usually a single chip solution with a whole host of different intellectual property blocks or IP blocks. Some of the main IP blocks include CPU cores, graphics/media, image signal processor, sensor hub, digital signal processors, various input/output technologies and, in many cases, a cellular baseband processor.

If we take a look at what Intel delivered with Skylake, we can see that a lot of these blocks are already there: 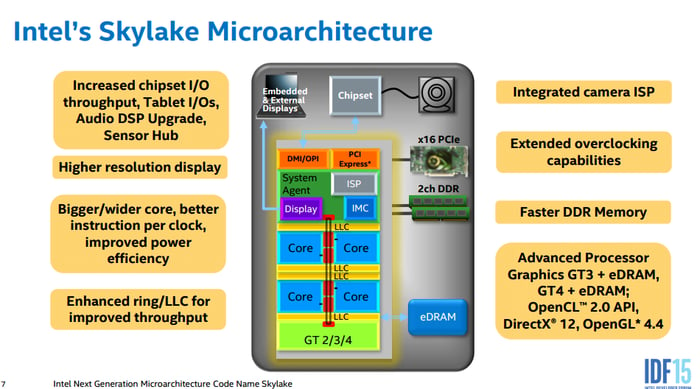 However, unlike in a "typical" smartphone chip, Skylake still has a number of key intellectual property blocks integrated into a separate chipset on the same package. To make it a "true" smartphone chip, Intel would probably need to bring all of that onto the main processor die.

However, things could start to get interesting as Intel transitions to its 10-nanometer architectures. It's not clear yet whether Cannonlake -- Intel's first 10-nanometer processor architecture -- is intended to be pin-compatible (that is, plug into the same boards) with Skylake and Kaby Lake.

If Cannonlake is intended to be compatible with those older chips, then a move to a true single-die system-on-chip might not be feasible until the follow-on architecture. If not, then Intel might have the freedom to make such a significant change.

When and if Intel begins to deliver Core M processors with just a single piece of silicon with all key IP blocks integrated, then not only would this make for an even better or more efficient low-power PC and tablet processor, but it could also finally be viable for smartphones.

Of course, simply getting to a single chip solution wouldn't be enough; Intel would need to make sure that such processors -- should they come into existence -- have leadership IP blocks across the board.

By this I mean that it won't just be enough to, say, deliver best-in-class CPU and graphics performance. Intel will need to make sure that all of the other IP blocks that are relevant to phones and phablets are top-notch as well.