Please ensure Javascript is enabled for purposes of website accessibility
Log In Help Join The Motley Fool
Free Article Join Over 1 Million Premium Members And Get More In-Depth Stock Guidance and Research
By Adam Galas - Sep 7, 2015 at 9:05AM

Kinder Morgan continues to add to its tanker fleet. Find out why the king of U.S. energy transportation is so interested in an industry that continues to struggle.

One of Kinder's 16 oil tankers. Image courtesy of Kinder Morgan.

Since January of 2014 Kinder Morgan (NYSE: KMI) has made some big moves into the oil tanker business, announcing almost $2.1 billion worth of investments into buying or building 16 Jones Act tankers.The latest deal is for $568 million to acquire four LNG convertible ships.

Since oil tankers are an industry that has long struggled with a global supply glut and low day rates, at first it might not be apparent why Kinder is so gung-ho to invest in this business. However, when you look deeper into Kinder's business strategy, it becomes easier to see why these deals benefit long-term dividend investors.

Fits well with existing business model
"There continues to be strong demand for domestic waterborne transportation to move petroleum products and crude oil, and our fleet of highly efficient tankers will provide stable, fee-based cash flow to KMI shareholders for many years to come through multi-year contracts."-- Kinder Morgan Terminals President John Schlosse

When it comes to land based fossil fuel transportation, Kinder Morgan is king. It operates 84,000 miles of natural gas and oil pipelines and 165 storage and transfer terminals for oil, refined petroleum, chemicals, and even bulk goods such as coal, steel, and fertilizer.

By adding Jones Act tankers -- by law the only kind that are allowed to transport products between U.S. ports -- Kinder hopes to grow its market share of water-based U.S. energy and chemical transportation.

Of course, the addition of these tankers makes sense only if the deals are accretive to distributable cash flow and thus help to boost Kinder's chances of making good on its projected 10% dividend growth through 2020. As Schlosse makes clear in his quote, management believes this to be the case.

That's because Kinder's business model is focused on long-term fixed-fee contracts, which provide for highly predictable cash flows from which to secure and grow the dividend. 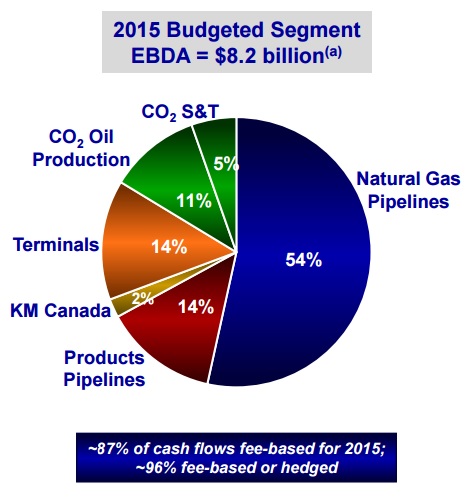 Thus the key to making Kinder's tankers an asset to its business model is that 14 of its 16 vessels are already under long-term contract with major oil and chemical companies, with the average length of their remaining charters -- including optional extensions -- being 5.2 years.

The two uncontracted tankers are set for delivery in late 2017, and Kinder is already in negotiations to secure long-term charters for them and expects such contracts to be in place by early 2016.

Don't get me wrong: For now, even 16 tankers, with a combined capacity of about 5.3 million barrels of oil, won't move the needle much for a company of Kinder's size, and thus you shouldn't be investing in Kinder Morgan as an oil-tanker stock. However, the company's growing tanker fleet will be a solid source of dependable cash flow that should aid its dividend growth plans.

Bottom line: Diversifying into tankers is a boon to dividend investors
Kinder Morgan will probably always be mainly a natural gas pipeline business, even if the company greatly expands its oil tanker fleet. However, I do think dividend-growth investors should be glad that Kinder, as part of its five-year, $22 billion growth backlog, continues to expand into new energy transportation markets.

The long-term contracted fixed-fees these vessels provide should help Kinder diversify its cash flow base, as well as increase the chances of hitting its five-year dividend growth objectives. That in turn should assist Kinder in maintaining its status as one of America's best dividend-growth blue chips -- one that is likely to provide many years of market-beating returns.