Please ensure Javascript is enabled for purposes of website accessibility
Log In Help Join The Motley Fool
Free Article Join Over 1 Million Premium Members And Get More In-Depth Stock Guidance and Research
By Matthew DiLallo - Sep 8, 2015 at 10:03AM

Like many of its peers, Encana (OVV 3.33%) has struggled amid the downturn in the oil price. However, the company has worked hard to address some weaknesses that the downturn exposed. It has really improved three key areas over the past year, though the market seems to be overlooking these improvements.

1. Its balance sheet
It wasn't that long ago that investors were really concerned about Encana's balance sheet. However, thanks to a series of transactions the company has vastly improved its debt profile, which as the following slide shows is rated investment grade. 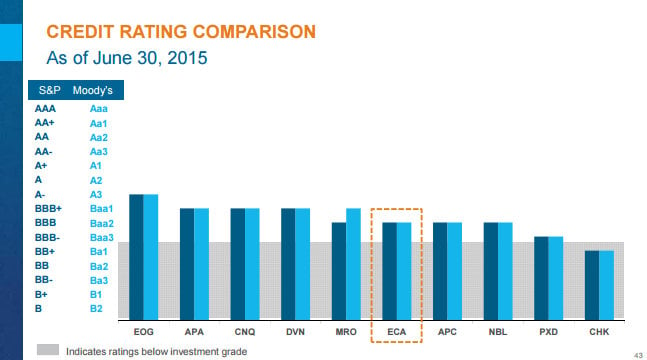 The company has become much more fiscally disciplined over the past few years. Gone are the days where it relied on debt to fund any shortfall in between its capex and cash flow as the company is committed to living within cash flow from operations and asset sales to fund its growth. Not only that but it has reduced its debt by a total of $2.3 billion since late 2013 by selling noncore assets.

2. Its margins
Encana hasn't just unloaded assets to improve its balance sheet. It has been very strategic in what it has sold with the focus being on shedding its lower margin natural gas production. It has then replaced that production with higher margin oil either via acquisitions or through the drill bit. This has driven a pretty remarkable shift in its margins, which have enabled the company produce more cash flow with less production.

For example, the company recently announced the sale of its Haynesville shale assets. While those assets had been contributing 9% of the company's production, they only produced 2.5% of its cash flow. So, by shedding these assets the company can improve its balance sheet with the cash it is picking up while also improving its margin per barrel produced by investing its cash flow to drill oilier wells.

3. Its returns
One of the good things that does come out of a downturn is that it forces companies to become more efficient and reduce their costs. This is something Encana has been able to capture as well, which is improving its returns so that it can continue to drill profitable wells even at current prices. For example, in the Duvernay it has reduced its drilling time by 28 days per well, which has shaved of $700,000 of its well costs and increased its drilling returns. The company is seeing similar savings across all four of its core plays, which have kept its well returns strong as we see on the following slide. 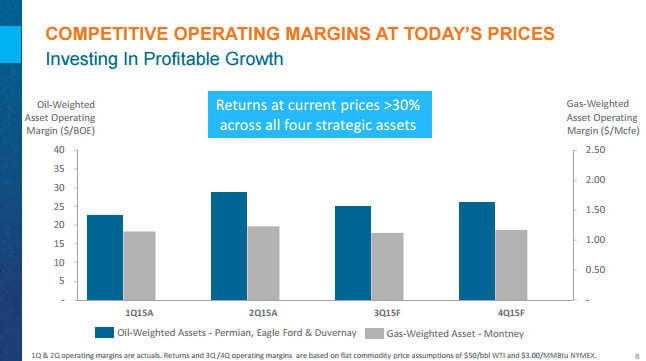 As that slide notes, its drilling returns are in the 30% range at current commodity prices, which is solid considering how far those prices have fallen.

Investor takeaway
Encana has really been proactive in improving its balance sheet, so it doesn't have the debt worries of many of its peers. This enables the company to focus on improving its margins and returns so that it can still grow during these tough times. Because of this the company is well-positioned to not only survive the downturn, but really thrive when better days do return to the oil patch.