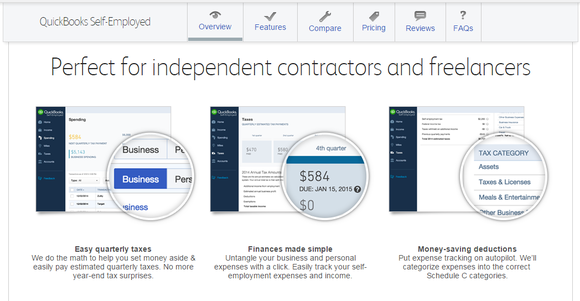 So What: Intuit shares plummeted 13.3% the day after the company released fourth-quarter fiscal 2015 earnings on August 20th. The company's full-year revenue of $4.2 billion came in lower than management's own guidance of $4.4 billion. In addition, Intuit provided a fiscal 2016 revenue forecast of between $4.5 billion and $4.6 billion, which was below the roughly $5.0 billion analysts were expecting for the next fiscal year.

With its earnings release, Intuit announced the divestiture of three software product lines: Quicken, Demandforce, and QuickBase. While Quicken has been a highly visible personal finance product for years, it's no longer central to Intuit's growth plan, which calls for expansion of cloud-delivered, small business services through QuickBooks Online, and continued penetration of the U.S. and Canadian tax-software market.

The divestitures will trim Intuit's revenue by about $250 million in the new fiscal year, an amount equal to 5.5% of projected 2016 revenue, and will also decrease earnings per share by $0.10.

Now What: The depth of Intuit's fall after earnings was quite unusual for this stock, which has enjoyed a relatively smooth ascent for several years: 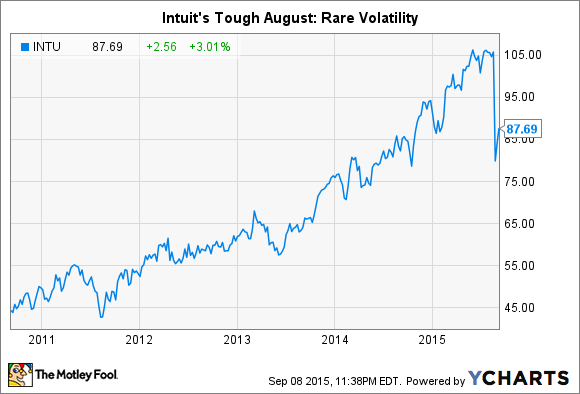 Intuit's business model is in transition as it migrates its legacy desktop QuickBooks users to QuickBooks Online. As part of this transition, in Q1 2015, Intuit changed its method of accounting for desktop software sales, resulting in a higher percentage of deferred revenue, or revenue that will be recognized in future periods.

This has made the comparability of Intuit's revenues versus prior periods a bit difficult for the average shareholder to follow, although comparability should resume next quarter, when the changes get "lapped."

Some of this difficulty in getting a read on Intuit's comparable sales may have exacerbated shareholder misgivings over the shedding of the Quicken brand, thus sharpening August's sell-off.

However, Quicken's relatively small contribution to both top and bottom lines supports management's actions, especially when one considers that the company's core growth product, QuickBooks Online, saw  a 57% expansion in its customer base during the year, to 1.075 million users. Management is apparently willing to risk a bit of uncertainty, and even turmoil, in company stock, in order to focus firmly on where it believes its most persuasive opportunities lie.