Learn about a little known threat to Seadrill that could have massive repercussions for the offshore drilling giant.

Investors in offshore driller Seadrill (SDRL) know that two of the largest risks they face are continued low oil prices and the ongoing worldwide glut of oil rigs, especially of the high-margin, ultra-deepwater variety. These two factors are the most to blame for Seadrill's painful 85% decline since its mid-2013 highs. 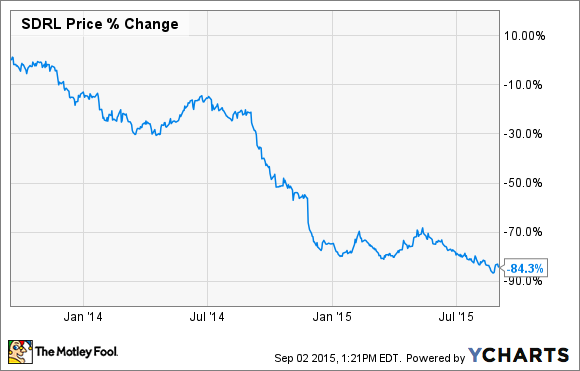 However, what many investors may not realize is there is another risk to Seadrill that has gone largely underreported, a risk that could have serious consequences for the future of the highly leveraged company and its shareholders.

Customer concentration is a major risk during an industry downturn
According to Seadrill's 20-F -- its equivalent of a 10-K annual report -- at the end of 2014 the company derived 20% of its future contracted revenue from its single largest customer, Brazilian national oil giant Petrobras (PBR -3.17%). Overall, Seadrill's five largest customers at the beginning of the year generated 63% of its total future sales, with four customers representing 10% or more of future revenue.

While a relatively small customer base is a risk that all offshore drillers face, Seadrill's customer concentration is particularly worrisome.

As a point of comparison, two of Seadrill's biggest competitors, Transocean (RIG -0.45%) and Ensco plc (VAL), have more diversified customer bases. For instance, at the beginning of the year, Transocean's two largest customers, Chevron and BP, represented 11%, and 9% of its operating revenue, respectively, with no other customer accounting for more than 10% of sales.

The reason to be concerned about Seadrill's customer concentration isn't just that Seadrill seems overly reliant on a few key oil companies, but rather that its largest customer is not exactly the most reliable customer right now.

In 2014 the company had to take a $16.7 billion impairment charge, including $11.7 billion resulting from the halting of two refinery projects, both linked to the scandal. One refinery, Refinaria Abreu e Lima, has seen its costs soar fivefold to $20 billion, while the still uncompleted Comperj refinery is now expected to end up resulting in a $14.3 billion loss for the company.

The reason for the giant losses and cost overruns? According to Brazilian newspaper O Globo, citing Brazilian police and prosecutors: "A cartel of construction and engineering companies conspired with top Petrobras executives to overcharge for work. Some of those excess payments were then kicked back to Petrobras executives and politicians allied with Brazilian President Dilma Rousseff as bribes or campaign contributions."

The extent of the bribes was high enough that, in 2014, the company took a write-off of over $2.5 billion just to account for money spent corrupting government officials.

Most recently, Reuters is reporting that the company, in addition to its already staggering corruption losses, will have to pay a record fine of at least $1.6 billion.

How Petrobras is hurting Seadrill
Seadrill's reliance on Petrobras has already affected its business and threatens to continue to do so. For one thing, back in February, Seadrill had to remove $1.1 billion from its backlog because of delays and changes in contract terms regarding Petrobras' contract extensions for the West Taurus and West Eminence rigs.

Those rigs, which previously had been generating revenues of over $600,000 per day each, are currently idled, resulting in negative cash flow for Seadrill because of ongoing maintenance costs.

While management is trying to find new work for these idle rigs, five more of Seadrill's UDWs have exposure to contracts with Petrobras. Three of these are directly owned by the company, and two are owned by Sevan Drilling, a foreign offshore driller that's 50.1% owned by Seadrill.

Two of those contracts -- the Sevan Driller and West Orion -- end in mid-2016, and given Petrobras' troubles, there's a risk that the oil company won't renew them. Even if it does, chances are any new contracts will likely to be for far less than the $417,000 and $592,000 respective day rates these rigs are currently receiving.

That's especially true since, because of both its massive corruption linked losses and low world oil prices, Petrobras is planning on cutting capex spending by $54 billion in 2015 and 2016, on its way to likely spending reductions for 2015-2019 of $60 billion to $70 billion.

While I don't think it likely that Petrobras' problems will bankrupt the company, I do think they might slow any recovery in Seadrill's business and share price.

Adam Galas has no position in any stocks mentioned. The Motley Fool recommends Chevron and Seadrill. We Fools may not all hold the same opinions, but we all believe that considering a diverse range of insights makes us better investors. The Motley Fool has a disclosure policy.