Please ensure Javascript is enabled for purposes of website accessibility
Log In Help Join The Motley Fool
Free Article Join Over 1 Million Premium Members And Get More In-Depth Stock Guidance and Research
By Demitri Kalogeropoulos - Sep 11, 2015 at 7:40AM

What: Digital content delivery company Limelight (LLNW 0.29%) saw its stock plunge 37% lower during the month of August, according to S&P Capital IQ data. That sharp drop erased nearly all of the gains that shareholders accrued over the last year, even though Limelight had rallied by 70% in the six months ending this past March. 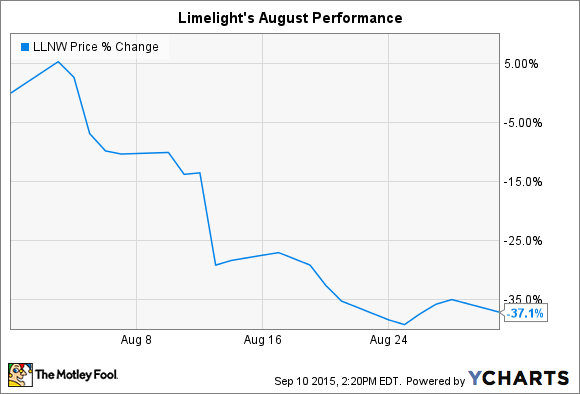 So what: Shares ticked down early in August. And shareholders can blame the move on second-quarter earnings results that beat Wall Street's expectations but also came with a surprisingly large loss forecast. Limelight is seeing strong sales growth from its biggest digital content customers. However, these clients also tend to qualify for large volume-based pricing discounts and so Limelight's profitability is under pressure from this dynamic of lower-margin sales growth. That's why management boosted their 2015 revenue guidance but also warned that Limelight should lose $0.13 per share in the third quarter. Analysts were expecting more moderate losses of closer to $0.03 per share.

Yet the bigger contributor to Limelight's August stock price dive was news that it lost a long-running patent infringement court case, leading to a $45 million judgment against it. By comparison, in 2013, a rough earnings year for Limelight, the company suffered a $40 million loss. Limelight did just a little better last year with a $27 million operating loss.

Now what: There's still a small chance that management could find a way to overturn the $45 million judgment. "We are disappointed this outcome isn't aligned with the recent rulings in our favor, and are determined to continue the process," CEO Bob Lento said in a press release.

Meanwhile, management says they believe the company has a strong enough balance sheet to survive any negative ruling. To be sure, Limelight had $75 million of cash on its books as of the end of June, which means it could easily handle a $50 million loss. But there's no denying that, at 20% of its current market capitalization, we're talking about a huge potential cash drawdown that has understandably shaken some investors.