Drug resistance is a big problem.

The superbugs are here. And we humans created them.

Superbugs are bacteria that have become resistant to antibiotics. When a bacterium divides, the DNA replication process can introduce a mutation. While many of those mutations may be harmful to the bacterium, some mutations may cause the bacterium to no longer be affected by an antibiotic. Some bacteria are also capable of taking up DNA they find in their environment, which can also help them become resistant to antibiotics. 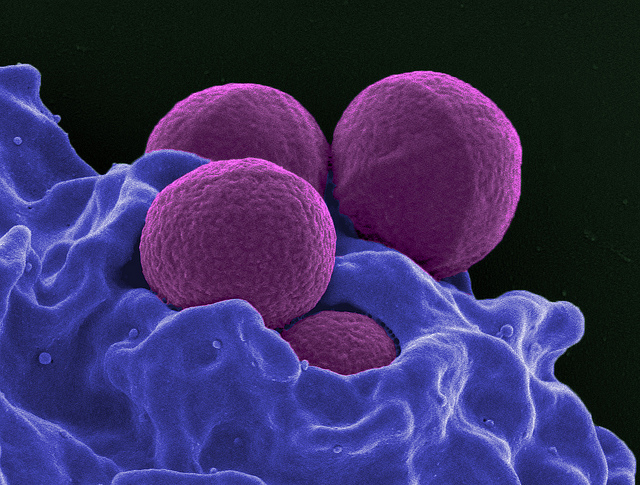 Treat enough patients with an antibiotic, and you're eventually going to select for a bacterium that's resistant to the drug. That bacterium is now free to grow in the patient with the antibiotic unable to do anything about it.

Patients infected with that bacterial strain are then treated with a different antibiotic, and the process repeats itself. Eventually you end up with superbugs that are resistant to multiple antibiotics.

The only solution is for drugmakers to stay one step ahead of the bacteria. There was a period a few years ago when drug companies stopped developing new antibiotics because the economics didn't make sense, but the rise of superbugs has increased the development of new antibiotics because companies can now charge a premium price for their very necessary treatments. Government incentives, including extended exclusivity periods before generics can come on the market, have also spurred development.

While there are many small companies developing antibiotics, here are two companies deeply involved with countering this important threat that investors should take notice of.

Strength through acquisitions
Through its $9.5 billion purchase of Cubist Pharmaceuticals, Merck (MRK -1.39%) became an instant player in the superbug-fighting club. Before the acquisition, Cubist had actually acquired multiple antibiotic companies, creating a nice portfolio for Merck to snatch up.

Cubit's namesake antibiotic, Cubicin, is approved to treat complicated skin and skin structure infections and bloodstream infections from a bacteria called Staphylococcus aureus, which is often referred to as a staph infection. Importantly, the drug can be used on staph that has become resistant to methicillin, an antibiotic that's been used for half a decade.

In addition to the drugs it got from the Cubist acquisition, Merck has a few internal drug candidates to help fight superbugs, including MK-3415A, a combination of actoxumab and bezlotoxumab. The drug combo is being tested in clinical trials for patients that have infections from a bacterium called C. difficile that have returned after initial treatment.

New kid on the block
Heart drug specialist The Medicines Company (MDCO) is a relatively new player in the antibiotic space, having received FDA approval for Orbactiv a little over a year ago. The drug treats acute bacterial skin and skin structure infections including the methicillin-resistant staph kind.

Like Merck, The Medicines Company has expanded its arsenal through acquisition. In late 2013, the drugmaker bought Rempex Pharmaceuticals for up to $474 million.

In April, the first fruits of the acquisition were picked when the FDA approved a new formulation of Minocin for injection. The antibiotic treats Acinetobacter, which is quickly developing resistance to multiple antibiotics.

Next in the pipeline, Carbavance is a combination of a beta-lactam antibiotic, meropenem, and RPX7009, which, like Merck's relebactam, is designed to make drug-resistant bacteria sensitive to beta-lactam antibiotics. The drug is in two phase 3 trials that are scheduled to be completed next year.

Better buy?
It's rather silly to ask which company is a better buy based on the antibiotics they sell and are developing, because both Merck and The Medicines Company sell other drugs that make their antibiotic portfolios a minor piece of their revenue stream. That being said, investors considering either company as an investment can take solace in knowing that drugs to fight superbugs will remain in high demand for years to come.