Please ensure Javascript is enabled for purposes of website accessibility
Log In Help Join The Motley Fool
Free Article Join Over 1 Million Premium Members And Get More In-Depth Stock Guidance and Research
By Eric Volkman - Sep 16, 2015 at 6:20AM

In a quiet week for distribution hikes, a cell phone facilities REIT and a workplace safety specialist both boosted their payouts.

This isn't the best time of the year for dividend raises. We're still weeks away from the next earnings season, and the wave of hikes that blasted us over the summer seems to have crested. There will certainly be more big-name companies raising their payouts in the near future, but for now the market is largely quiet on that front.

That said, last week there was a handful of raises nevertheless, notably from these two companies:

American Tower (AMT 2.10%)
The proliferation of increasingly smart phones is goosing the business of this real estate investment trust, which specializes in the operation of cellular transmission facilities. American Tower is sharing the good times with its stockholders, in the form of a 5% increase in its quarterly dividend to $0.46 per share.

American Tower leases its structures to the usual cell phone carrier suspects, like Verizon and AT&T, which are typically locked in with long-term contracts (the average length is 10 years).

This is a good business to be in just now, as the Era of the Smartphone has increased demand for overall bandwidth. It's in every carrier's interest to maintain, if not expand, its transmission network. 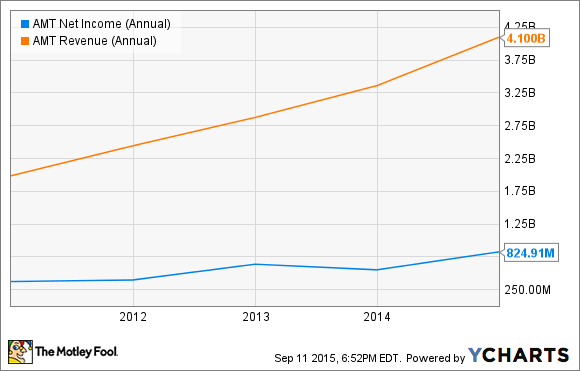 As a result, in its most recently reported quarter American Tower's revenue grew by 14% on a year-over-year basis (to $1.17 billion), while its adjusted funds from operations -- a key profitability metric for REITs -- rose by 13% to $537 million.

Since it's a REIT, American Tower is obligated to pay out the bulk of its earnings as dividends. As its profitability has generally been on an upward trajectory over the years, and it operates a business with high, sustainable demand, I think it will be able -- at the very least -- to keep the present dividend afloat for as long as it cares to.

American Tower's next payout will be dispensed on Oct. 7 to shareholders of record as of Sept. 23.

Brady Corporation (BRC 0.49%)
One of the lifters is a dividend aristocrat -- a company that's increased its payout at least once annually for a minimum of 25 years.

Brady, a manufacturer of workplace safety goods, has bettered that requirement by a half-decade. In its 30th consecutive year of doing so, it's boosted its quarterly dividend, albeit only incrementally -- by 1% to just over $0.20 per share. 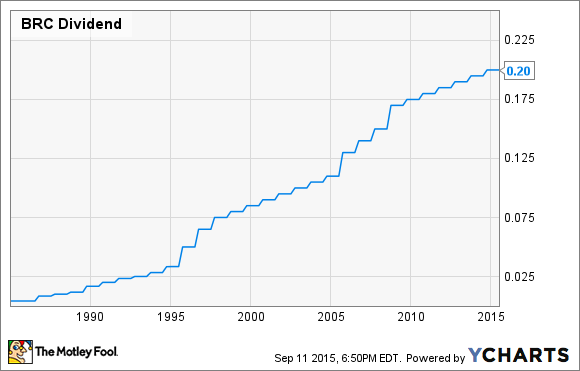 That cautious lift is probably linked to recent performance. The day after the dividend was declared, Q4 and fiscal 2015 results were released, and they weren't very impressive.

Better times apparently lie ahead, as Brady expects much higher profitability, albeit on the back of flat to low single-digit revenue growth. A fatter bottom line means higher free cash flow, which means more breathing room for the dividend. I'd be bullish on this payout, as I think the company will do its best to keep that aristocrat status, even if the financials don't improve as much as anticipated.

Brady's upcoming dividend is to be paid on Oct. 30 to stockholders of record as of Oct. 9.

3 Stocks You Didn't Know Are Part of Your Everyday Life

3 Large-Cap Stocks to Buy in June