When Biogen (BIIB -0.09%) lowered full-year estimates for its main growth-driver, it couldn't have picked a worse time to deliver the bad news. August has been a rough month for stocks for the past several years, and this year was true to form, with the iShares Nasdaq Biotechnology Index falling 10.5% last month.

At The Motley Fool we don't believe in timing the market, but we do get excited about major price movements to the downside. Taking the long-term view, we're prepared to ride out some pessimism, provided it's not entirely justified by fundamentals. With Biogen shares more than 30% below the highs they reached earlier this year, now might be a good time to buy a great company on sale.

Then again, we could be walking into a value trap. Let's take a closer look. 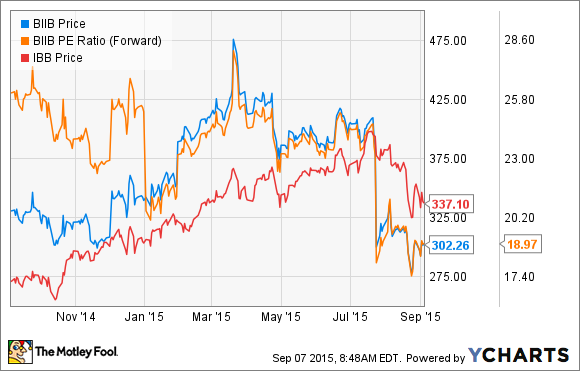 Since the U.S. launch of oral multiple-sclerosis treatment Tecfidera in March 2013, Biogen's quarterly earnings have grown a whopping 120% to $3.93 per share. With the bottom line growing so quickly, investors weren't necessarily wrong to push the stock to an above-average valuation. But now that shares trade at a forward P/E ratio below the S&P 500 average, it seems the market is expecting continued weakness from Tecfidera. It also seems the market isn't counting on success from two enormous opportunities that could provide tremendous upside in the years ahead.

Safety fears
Perhaps the biggest factor weighing on the stock today is fear that another patient taking Tecfidera will develop progressive multifocal leukoencephalopathy (PML), a rare brain infection. Tecfidera was the third multiple-sclerosis pill to enter the U.S. market, and in its first year on the shelves, it had an advantageous safety profile in a highly competitive field. Sales of Sanofi's Aubagio were hindered by a black-box warning -- the FDA's most serious -- before the drug ever hit pharmacy shelves. Later, Novartis had some success with Gilenya until reports of PML associated with its use held it back.

Multiple sclerosis patients suffer from poor signal conduction along nerve cells because their immune systems have damaged the myelin sheathing vital to their function. Disease-modifying treatments such as Gilenya and Tecfidera slow progression of the disease by suppressing the immune system. This immunosuppression can cause all sorts of problems, the most frightening of which is PML. A second report of PML associated with Gilenya in the months following Tecfidera's launch may have led physicians to consider Biogen's treatment safest, setting it up for one of the most successful drug launches in recent memory.

A report of PML in a patient taking Tecfidera last November, and another this spring from a Dutch patient receiving a locally formulated version of Tecfidera's active ingredient, has neurologists scratching their heads. Tecfidera's growth trajectory will most likely plateau while physicians play wait-and-see.

Given the murky safety profiles of oral treatments, physicians seem to have fallen back on longtime standard treatment Copaxone and its recently launched biosimilar, Glatopa. Both injectable treatments are expensive and often less effective. Their main advantage is simply a more established safety record. Without additional reports of PML in patients taking Tecfidera, this advantage should slowly erode.

Mega-blockbuster opportunities
Just two years following its launch, Tecfidera achieved an annual sales rate of $3.5 billion despite PML concerns and the fact that the drug, though effective at reducing disease progression, does nothing to repair damaged myelin. Now just imagine what a treatment could achieve if it actually improved nerve function.

Biogen has a candidate in midstage trials that appears to do just that. In a trial for acute optic neuritis (not MS), patients receiving anti-LINGO-1 were able to send signals from the retina to the brain at a significantly improved rate over patients receiving placebo. There wasn't a significant change in visual function, but the increased transmission rate certainly suggests myelin repair.

Currently, anti-LINGO-1 is in a phase 2 trial with 419 MS patients, and top-line results are expected next year. If there's proof of increased transmission rates along the neurons of these patients, Biogen investors, and the MS community at large, will have reason to celebrate.

The anti-LINGO-1 program is exciting, but it's arguably the smaller of two reasons to be bullish on Biogen's future. Aside from slowing Tecfidera sales, Biogen's depressed valuation owes also to the perception that an opportunity even larger than anti-LINGO-1 has faded.

Promising Alzheimer's candidate aducanumab excited Wall Street when the highest dosage -- 10 mg per kilogram of body weight -- in a phase 1 trial significantly slowed the rate of cognitive decline as measured by two tests compared with placebo. This dosage, however, was associated with safety issues, and the next lower dosage of 3 mg showed a significantly improved rate of cognitive decline on only one of the tests.

A safer dosage of just 6 mg slowed cognitive decline but failed to show improvement over placebo in a statistically significant manner. This could be due to the drug's limited efficacy -- or, hopefully, some unusually resilient minds in the placebo group.

The good news is that two phase 3 trials are under way and expected to enroll 2,700 patients. If there is a safe and effective dosage, we won't know with any degree of certainty for several years. Given the dismal performance of Alzheimer's drugs in the clinic, I wouldn't hold my breath.

Risk-to-reward
Considering Biogen's forward earnings multiple of just 19, high-single-digit growth going forward would probably lead to returns in line with the broad market. Even after revising guidance to account for an expected slowdown in Tecfidera, management has targeted 2015 earnings 17% above last year's. Without another PML report, next year could be even better.

In other words, at recent prices, Biogen looks like a solid investment before you even consider potential contributions from anti-LINGO-1 and aducanumab. Should either of these programs succeed, patient investors could reap huge rewards.