Please ensure Javascript is enabled for purposes of website accessibility
Log In Help Join The Motley Fool
Free Article Join Over 1 Million Premium Members And Get More In-Depth Stock Guidance and Research
By George Budwell - Sep 23, 2015 at 11:52AM

What: Shares of Heron Therapeutics (NASDAQ: HRTX), a biotechnology company developing best-in-class medicines that address major unmet medical needs, saw its shares rise by more than 25% today on heavy volume. This marked increase in Heron's share price was triggered by the release of positive top-line data for the company's experimental pain medicine, HTX-011, from a mid-stage study.

Specifically, HTX-011 reportedly met its primary endpoint of reducing post-operative pain in the first 24 hours in patients following a bunionectomy, compared to placebo. The drug was also generally well-tolerated in the study, according to the company.

So what: Medicines prescribed for post-operative pain raked in over $11 billion in sales in 2014. Even so, there is a serious need for new drugs that come with fewer, less severe side effects than standard opioid analgesics that are even known to significantly extend recovery times and hospital stays. Heron hopes HTX-011 can one day help to fill this huge unmet medical need, potentially putting it in the running to become a blockbuster product in the process.

Now what: Per the press release, management stated that they are planning to advance HTX-011 in a broad based clinical program to assess the drug's ability to reduce pain across a wide diversity of surgeries.

Put simply, the drug is probably still several years away from becoming commercially available, putting the onus for short-term value creation squarely on Heron's late-stage experimental medicine Sustol that is currently under review with the U.S. Food and Drug Administration.

Given that Heron's shares have now appreciated by almost 300% since the beginning of the year, I'm personally content to sit tight until Sustol's ongoing review is complete and the drug's initial sales are a known before buying shares. 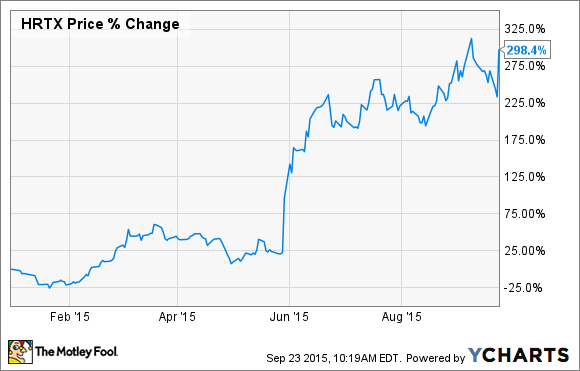 After all, the stock has clearly built in a huge premium based mainly on Sustol's commercial prospects, potentially limiting any further upside, especially after today's noteworthy move upwards.