Please ensure Javascript is enabled for purposes of website accessibility
Log In Help Join The Motley Fool
Free Article Join Over 1 Million Premium Members And Get More In-Depth Stock Guidance and Research
By Daniel Sparks, Brian Stoffel, and Beth McKenna - Sep 24, 2015 at 11:00AM

When it's all said and done, the present value of every asset is a function of estimated cash flows in the future. So, investors are always trying to put a finger on how well a company can generate free cash flow. Given the importance of future cash flow in justifying a company's stock price, it's a good idea to flip over to its cash flow statement and do some simple analysis to see if cash flow is looking good or not.

Sure, for fast-growing companies in nascent industries, meaningful cash flow could be years out as cash is reinvested into growth initiatives. But for more mature companies, it's always great to see some good ol' green. After all, it stands to reason that the companies most likely to generate boatloads of cash for investors in the future are those who have consistently generated boatloads of cash in the past.

On this note, here are three companies with an uncanny ability to generate cash for investors.

Daniel Sparks: There's arguably no better example of a cash cow than Apple (AAPL 4.01%). Consider some of these mind-boggling figures from its cash flow statements for the trailing-12-month period.

Brian Stoffel: Reinforced by its recent corporate name change, Alphabet (GOOG 2.15%) (GOOGL 2.37%) (formerly Google) is famous for spending lots of money on "moonshot" projects like Google Glass, self-driving cars, and contact lenses that could one day measure glucose levels for patients with diabetes.

But there's a reason that the company is able to pursue such interests: It is a cash-generating machine. Over the last 12 months alone, Google has produced almost $26 billion in cash flow from operations. Even if we back out the company's capital expenditures, it generated $14.5 billion in free cash flow in just a year's time. That helps explain how the company has amassed a cash pile of $70 billion sitting it the bank right now.

The big difference between Alphabet, however, and a company like Apple is that Apple will need to continually rely on new products to drive sales. While Alphabet certainly isn't resting on its laurels, it is the company's search dominance and ubiquitous advertising platform that provides the vast majority of its revenue -- a far more enduring and sustainable advantage than other cash flow giants.

Beth McKenna: Facebook (FB 1.39%) has been growing like gangbusters in terms of number of users, revenue, and earnings. Perhaps most importantly, however, the social media juggernaut is a cash-generating machine. Over the past 12 months, Facebook has generated $6.4 billion in cash flow from operations and $4.4 billion in free cash flow. Its rapidly expanding FCF has enabled it to accrue a cash stash of $14.1 billion. While this figure may pale next to Google's and Apple's cash hoards, it's a huge number for a company that's only been public for three and a half years.

Steady -- or better, consistently increasing -- cash flows provide a company with the means to invest for growth. This is particularly critical in the tech arena, where innovation occurs at lightning speeds. Without a nice pile of cash, Facebook wouldn't have been able to go shopping for companies such as Instagram, Oculus VR, and WhatsApp, all of which it acquired via a combination of cash and stock. Facebook has done a super job at monetizing its flagship platform, and will likely do the same with at least some of its numerous acquisitions. 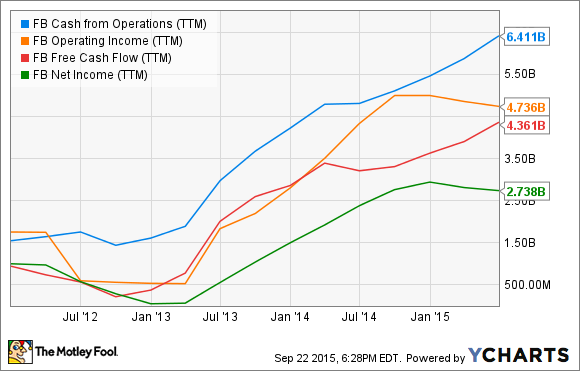 Considering relative cash flows can also enable investors to find undervalued stocks or stocks that aren't as highly valued as they might appear. That's because the most commonly used valuation metrics, such as the price-to-earnings ratio, are based on reported earnings or net income.