PayPal's independence creates fresh opportunities for the payments processor and its investors.

PayPal (PYPL 0.80%) is no longer living under eBay's roof. The e-commerce giant spun off PayPal in July thereby enabling PayPal to emerge as its own publicly traded company on the Nasdaq. The company's newfound freedom should render PayPal more nimble and therefore better able to fend off competitive threats in the payments space -- an industry that is evolving at a breakneck pace these days.

However, increased competition from deep-pocketed rivals such as Apple (NASDAQ: AAPL) could hinder PayPal's mobile ambitions. With multiple forces at play here, let's take a closer look at the pros and cons of PayPal since its spinoff to uncover whether the stock is worthy of your portfolio today.

The good stuff, with a side of competition
PayPal's payments processing business, Braintree, is a major catalyst for the company. It acquired Braintree for a cool $800 million in 2013 when it was a start-up with around 4,000 merchants. This was a smart investment for PayPal because it gave the company much-needed oomph in the mobile payments space. With clients such as Uber, Airbnb, OpenTable, and TaskRabbit, Braintree was already a leader when it came to processing mobile payments.

Importantly, mobile commerce, or purchases made on mobile devices such as smartphones, is one of the fastest-growing segments of e-commerce today. In fact, eMarketer estimates that mobile devices will account for "one in four retail e-commerce dollars" earned next year. Meanwhile, "In 2017, U.S. retail m-commerce sales will top the $100 billion mark," according to eMarketer.

Thanks to its purchase of Braintree, PayPal is well-positioned to capitalize on this mobile commerce trend. Under PayPal's guidance, Braintree is already enjoying double-digit growth and is expected to surpass $50 billion in transactions this year. When PayPal was under eBay's roof it didn't break out revenue figures for Braintree. However, this could change now that PayPal is an independent company, therefore investors should keep an eye on this when PayPal reports its third-quarter results next month. 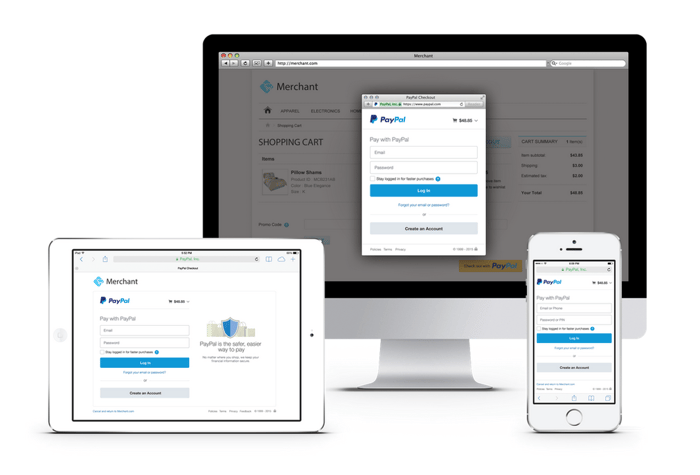 PayPal's One Touch is another potential game changer for the company. PayPal rolled out its One Touch mobile checkout service earlier this year on the Web, thereby enabling consumers to pay for purchases online and on their mobile device with just a click of a button. The service was first available a year ago, though only on mobile apps. Today, One Touch can store your PayPal login information on any browser, device, and operating system for up to six months, making it a fast and convenient way to purchase from your favorite merchant and retailer sites.

One Touch is now being used by millions of people and is available in 16 countries. This is a big deal for PayPal because it is attractive for both merchants and consumers alike. Not only does One Touch make checking out online easier for consumers, but it also improves mobile conversion rates by as much as 50%, according to PayPal -- thereby helping merchants turn more people into customers. As a result, this should significantly boost PayPal's transaction volume in the quarters ahead.

Through the competitive looking glass
Competition and the rapidly evolving nature of digital payments are perhaps PayPal's biggest headwinds today. PayPal faces intense competition from Apple in the all-important mobile arena, as it now must directly compete with Apple Pay. That's no easy task considering PayPal is a much smaller company compared to Apple. For example, as a payment's processor, PayPal currently has 154 million consumer credit cards on file. While that is up double-digits from a year ago, it pales in comparison to Apple, which now reportedly boasts data for some 800 million credit cards worldwide. It's not clear how many people are using Apple Pay, but reports earlier this year were indicating it was not catching on quickly. .

Apple could become a problem for PayPal down the road, but for now PayPal is holding its ground against the tech giant.

It seems the pros outweigh the cons for PayPal today. More than 10 million merchants now utilize PayPal services, and the company currently boasts 169 million active users. On top of this, the PayPal brand is trusted and universally recognized as secure in the digital payments space. This provides PayPal with an intangible asset and competitive advantage over newer entrants in the space.

A word on valuation
This brings us to the stock. Shares of PayPal are trading around $34 apiece today, down from a high of $42.55 since the stock debuted in early July. This creates an attractive entry point for patient investors, particularly because the company has generated strong earnings growth in recent quarters and the catalysts discussed above suggest this momentum should continue. During the quarter ended in June, PayPal increased its total payment volume by 20% to $66 billion in the three-month period.

PayPal also added new members at a breakneck pace during the second quarter. Its active accounts increased 11% to 169 million in the period, thereby helping PayPal process more than 1 billion transactions in the quarter.

As an independent company PayPal will be able to focus on innovation and product development like never before. Moreover, PayPal operates in a fast-growing industry. As my fellow Fool Matthew Frankel pointed out: "the online and mobile payments marketplace is expected to grow into a $25 trillion addressable marketplace." This, together with PayPal's recent growth initiatives, should help the company outperform in the quarters ahead.

For these reasons, I believe PayPal stock is a worthy investment today. PayPal is set to report third-quarter earnings, its first quarterly announcement as a stand-alone company, next month. Stay tuned to see how things are going for the newly public company.