With an undrawn credit facility, Chesapeake Energy Corporation doesn’t need to worry about the fall re-determination period that could impact its peers.

There's a growing concern on Wall Street that this fall could be a very bad time for energy companies. That's because each spring and fall, banks redetermine the credit lines they are willing to extend to oil and gas producers. Prior to the oil downturn, this meant credit line increases, but this time around, credit lines are likely going down alongside oil prices.

For producers with a large portion of their facility drawn down, it's a worrisome thought that this key funding lifeline could be reduced at the worst possible moment. Having said that, it's not something Chesapeake Energy Corporation (CHKA.Q) is worried about, as it has a completely undrawn credit facility.

Solid liquidity
Chesapeake Energy's financial position is actually the strongest it's been in years. This is largely due to a number of asset sales the company has completed over the past year, capped off by the nearly $5 billion sale of its Southern Marcellus and Eastern Utica shale assets to Southwestern Energy (SWN -0.38%) at the end of last year. The company used these proceeds to bolster its balance sheet so it could secure a new $4 billion credit facility with its banks. That facility remains completely undrawn and is enhanced by the fact that the company has a $2 billion cash position.

That's really strong liquidity in the current market, as most of its peers can only claim the liquidity of what's remaining on the borrowing base of their credit facility. For some, that remaining capacity is low. Fellow natural gas producing peer CONSOL Energy (CNX -0.55%), for example, recently had as much as 60% of its capacity drawn, while Southwestern Energy, on the other hand, had about 15% of its capacity drawn, according to data from S&P Capital IQ.

A dangerous deadline approaches
This is a growing concern for companies, especially those like CONSOL Energy, who have borrowed on a large portion of their borrowing base. The concern stems from the fact that analysts think banks will cut deeply into borrowing capacities this fall. In fact, Bloomberg reported that a recent survey of analysts showed that they now expect 80% of energy companies will see their borrowing base cut, with the average cut being 39% of capacity. For a company like CONSOL Energy, such a cut could be devastating since it would remove a big chunk from the company's available liquidity, which is shown on the slide below: 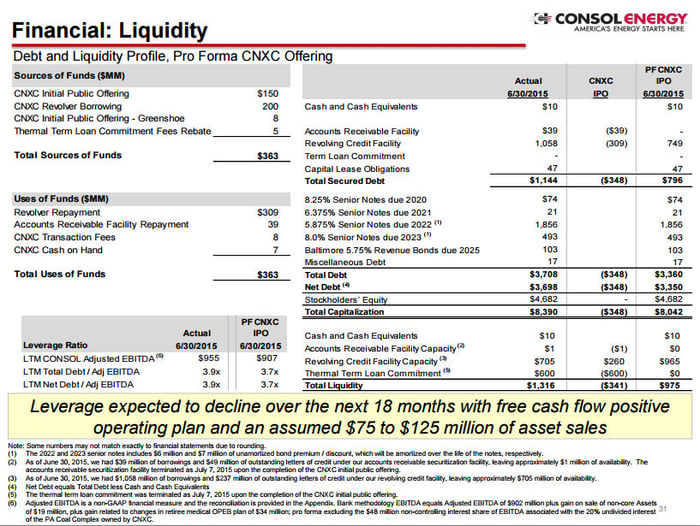 As that slide notes, the company now has $749 million drawn on its $1.7 billion facility after paying some of it down after the IPO of its coal MLP. This brought its drawn capacity down from the aforementioned 60% to a slightly more comfortable 44% of borrowing capacity. However, while that now leaves it with $965 million of remaining capacity, that amount is not set in stone, as its banks can redetermine its credit this fall. A worst-case scenario of a 39% capacity cut leaves CONSOL Energy with not much more than $300 million in liquidity. In other words, CONSOL Energy's liquidity position isn't all that solid.

Even Southwestern Energy needs to be mindful of its credit facility. As of the end of last quarter, it had borrowed $676 million from its facility, leaving it with $1.3 billion in liquidity. That liquidity, however, would take a big hit if banks slash borrowing bases this fall as deeply as analysts fear.

Investor takeaway
Chesapeake Energy doesn't have a whole lot to be worried about this fall as it boasts a $2 billion cash position and hasn't borrowed a dime on its credit facility. That leaves it in a much more solid liquidity position than CONSOL Energy and Southwestern, which have limited amounts of cash in the bank and are therefore relying on their credit facilities for liquidity. Those credit facilities, however, aren't as liquid as cash in the bank, as banks are very likely to reduce credit lines this fall given the persistent weakness in commodity prices.