Big swings in biotechs are nothing new, but not one of these companies issued a press release today. No failed clinical trials. No FDA rejections. Just crickets.

So what: It seems biotech is falling out of favor with investors, which was bound to happen for an industry that's been on fire the last few years. We've seen a decline in share prices across the board over the last couple of months since the iShares Nasdaq Biotechnology ETF (IBB 0.90%) peaked.

And, not surprisingly, companies that have gone up the most are likely to fall the most. All of the companies mentioned above were beating the IBB year to date through August. 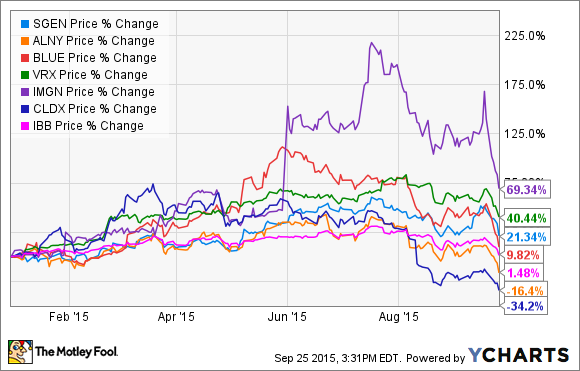 Now what: Nothing has fundamentally changed about the biotech industry. Even Genomic Health (GHDX), which sells cancer tests, and Illumina (ILMN 0.48%), which sells genetic sequencers, fell almost 10% at some point today, suggesting that investors aren't just worried about drug companies.

Sure, lawmakers are shaking their fists at high drug prices -- fellow Democrat Presidential candidate Bernie Sanders sent an official letter to Turing Pharmaceuticals asking about its 5,000% price increase this week -- but this isn't the first time they've complained, and it probably won't be the last. Investors that bought drugmakers on previous worries -- healthcare reform during Bill Clinton's and Barack Obama's tenures -- made out pretty well.

This time it could be different, but even if lawmakers close loopholes that allow companies to do what Turing Pharmaceuticals did and otherwise try to limit drug prices, they're unlikely to curtail drug prices enough that it curtails innovation. Companies that are developing novel products for unmet needs are unlikely to be harmed much in the long run.