Please ensure Javascript is enabled for purposes of website accessibility
Log In Help Join The Motley Fool
Free Article Join Over 1 Million Premium Members And Get More In-Depth Stock Guidance and Research
By Matthew DiLallo - Sep 26, 2015 at 11:45AM

Conch Resources, Laredo Petroleum, and Pioneer Natural Resources are sitting on a boatload of oil potential just waiting to be released.

It's no secret that this is an awful time to own energy stocks. Most have been pummeled over the past year and there's no sure sign on the horizon that things will get better anytime soon. Having said that, the long-term potential for oil production in America still remains bright thanks to the unbelievable amount of oil sitting in the legacy West Texas Permian Basin, among other places. For investors with the patience to wait things out, three of that basin's premiere players could turn out to be very lucrative long-term investments.

This combination of a strong resource position with a rock-solid balance sheet sets the company up very well for the future. It should easily survive the current downturn in the oil market -- what little debt it has is very manageable, while its current cash flow adequately supports its capex program. Meanwhile, with its abundant resources, the company has a huge growth runway as industry conditions improve.

2. Concho Resources (CXO)
These same two characteristics are also what set Concho Resources apart from most other oil companies. It too has a very compelling resource position covering 700,000 net acres in the Permian Basin, underneath which the company estimates lies 3.7 billion barrels of oil equivalent. It's a strong resource base that the company has used to fuel its 35% compound annual production growth rate from 2007 to 2014.

Concho's other strength lies in its balance sheet, which, as the following slide shows, is very light on debt. 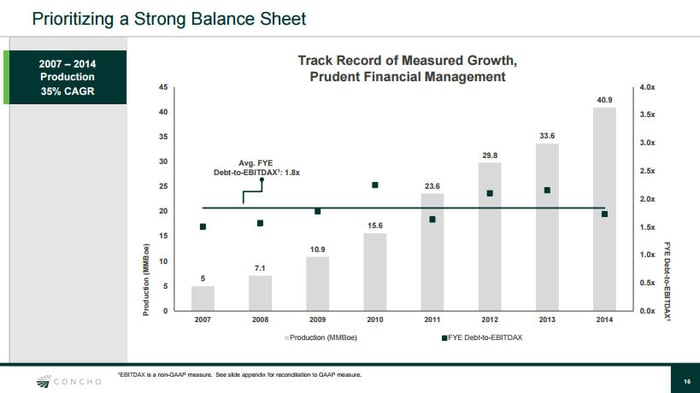 This low leverage ratio, which is half what a lot of other oil companies tend to be comfortable with, is due to the fact that unlike those peers Concho Resources didn't use debt to fuel production growth, but instead largely invested within its cash flow. That put the company in a very strong position to weather the downturn as it hasn't been forced to make moves to bolster its balance sheet. Instead, it has focused on getting its costs down to improve drilling returns amid lower prices. That has it positioned to thrive when conditions improve.

3. Laredo Petroleum (LPI 5.58%)
Sticking with that same theme, Laredo Petroleum also has a strong portfolio in the core of the Permian Basin to go along with a low leverage profile. That being said, Laredo is much smaller than its peers as its acreage position is under 150,000 net acres. However, the company still expects to be able to drill about 3,000 horizontal wells on it s acreage in the future, which will drive tremendous production growth for years to come. In fact, the company expects its production this year to be 17%-19% ahead of last year's production, despite the fact that it's operating within its cash flow during the second half of this year.

Laredo Petroleum has done a very good job of improving its well returns during the downturn by focusing on drilling better wells. The net result is that the company's latest wells are delivering returns that are on par with those it was earning on wells drilled when oil was much higher. This suggests that when oil prices do rally, Laredo Petroleum can really cash in.

Investor takeaway
The downturn in the oil market has exposed weaknesses in a number of shale drillers that relied on a lot of debt to fuel growth. Having said that, not all companies following that blueprint for growth as Pioneer Natural Resources, Concho Resources, and Laredo Petroleum largely avoided leverage. Because of that, all three have solid balance sheets to go along with very strong positions in a premiere oil basin. It's a combination that suggests all three can create a lot of value when conditions improve in the future.